It's Taco Time in the Salt City! A special post-season edition, but the sacred cows keep being made into sliders.

I'm not trying to be contrarian, this is just some shit you'll probably not agree with. After reading this you might even hate me more than you currently hate Brandon Triche. I've wanted to get this off my chest for years, I've just never had the appropriate venue. Now I do. Without further ceremony, here it is: the Blarney Rock sucks.

You know "the Blarney," right? The "official" Syracuse bar during Big East Tournament play? Perhaps you've even been. Or aspire to finally go this year. You're going to be woefully underwhelmed.

I remember my first year out of college, living in New York City. My friends and I were so excited to finally get to visit the legendary Blarney Rock Pub. Thrilled to finally get to mingle with real adult Syracuse fans. To get to chat with supporters who had seen it all. Who knew JB back when he was a walk-on...or The Pearl when he still weighed under 300 pounds. We had read about the Blarney online, heard rumors of its greatness passed down from wizened elders. And then we got there. Oh boy.

This was 2002. Syracuse had a poor regular season if you recall and faced-off against the Eastern Division #5 seed (don't ask) Villanova in a 7 PM first round match-up, needing a win to have any shot to get on the good side of the bubble. Back then, you could still get a ticket to a game like this for $10. At the box office. Walk-up at the absolute last second. That was a good thing because, at that age, we had neither the foresight nor bank account to handle anything more stressful. But, before that game, headed toward the Garden, we stopped at the mythical oasis. This mecca for our people. The vaunted Blarney with it's charming "est. 1969" sign encrusted on a withering facade. And my first thought was: what a shithole!

But there was a massive line of the Orange-clad, snaking out the door and toward Seventh Avenue's Sbarros, so of course we waited, surely about to encounter the magic once we got inside. And, then, once we were finally let in, we all realized..uh yeah, indeed: what a shit hole!

But that was a decade ago. I understand why people went there then. Back then there were literally no other choices in that part of Manhattan. Now? Now there are near countless. Like Stout just next door. I have my own unique hatred for Stout (their management was responsible for THE worst book signing event I've ever had in my life...but that's another story for another day), but in tale-of-the-tape format, the two bars don't even compare to each other.

Ability to get in during tournament week

Blarney: Must wait in an unending line with--to put it nicely--"older folks" smoking butts until allowed entry. Area bums will assuredly hassle you for change.

Stout: Quickly and easily since, due to its ample size, it's virtually impossible for fire code maximum to be reached.

Blarney: A claustrophobe's worst nightmares with a ceiling so low it will scrape your toupee. The grubby walls are--not covered with Syracuse shit, this isn't Tully's--but rather old Knicks and Rangers posters, random athlete 8X10s, and union stickers affixed to any surface they can be stuck to. Dirty tables, chairs, and the faint smells of vomit. Overly sweltering no matter how cold it is outside. You'll feel like you're drinking inside a stalled subway car.

Stout: Sure it's a "plastic paddy" pub, but it's as big as a bowling alley with higher ceilings than a racquetball court and a long, well-tended bar. It's also hospital-clean with its pleasant air quality smelling of fresh wood, burgers, and beer. They also do a cool thing where they ceremoniously flip over a placard every time a team loses in the tournament.

Blarney: Admittedly packed to the gills with Syracuse fans and also quite a few "regulars," longshoreman-types who will probably kick my ass after reading this on their tablet computers.

Stout: Likewise packed with Syracuse fans, though of the younger variety. Also...chicks.

Stout: Actually has them if you have any interest in trying and celebrating the post-season with some coitus.

Blarney: Ancient Irishmen and women moving slow as molasses. Then again, there's dozens of drunks shoving money at them like some zombies at a strip club stage.

Stout: Chicks that are kinda slow too. But at least they smile and occasionally offer a buy back.

Blarney: Pulled straight out of a freezer then nuked. You pretty much must be seated at one of the five tables in the back to get any food.

Blarney: As small as a telephone booth, room for one, maybe two patrons, there's always a wait to get in and you're almost guaranteed to accidentally touch your clothes to something urine-soaked.

Stout: Probably the largest bar bathroom in NYC, so immaculately clean I would even consider shitting in there. Bonus points for the best sinks and hand dryers around.

Blarney: Overpriced macro-swill and TINY faux-pints of Guinness. Mixed drinks served in crystal wine goblets circa 1969, over-iced so much any drink you order is nearly see-through.

Blarney: A few tiny and rickety TVs with the most basic of cable packages, often turned to irrelevant hockey games even while BET games are going on some 1000 feet away.

Stout: State-of-the-art HD flat screens and massive projection screens, with literally every sports package under the sun available, even obscure European sports if that's your thing. However, all TVs are turned to Big East basketball.

You say...but but but the Blarney is "our" bar!

It's been family-owned for 40 years by true Syracuse fans!

They even hang a tiny Syracuse banner up inside!

And I say: every bar in New York City is "our" bar and I would guess both Stout and Feile (and perhaps even Foley's further down 33rd St.--they hang a Syracuse flag out front!) have more Syracuse fans in them at any given time during the BET than the tiny, filthy, fire hazard known as the Blarney Stone. And they are all vastly superior bars.

Fact is, the Blarney became "our" bar because there were no other bars at the time. And that's cool we still hold strong to it. Like a game of Risk, I like that Orange Nation controls that valuable land mass. But I know many others hate it just like I do...and are simply scared to admit it, it's such a sacred cow amongst the Orange faithful.

Any how...I'll see you at the Blarney in a few hours. I hope they let me in. 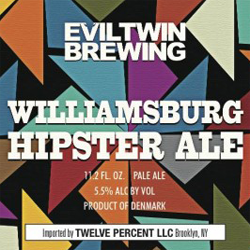 For me, almost more than basketball, Big East Tournament week is about copious beer-drinking. I've already ranked my top 25 upstate NY beers, but with so many Syracuse fans in the city for the next few days, I thought I'd rank my top NYC (and accompanying suburbs) breweries. You can't go wrong with any of these pre-, post-, or during the games:

2. Brooklyn Brewery -- OK, so their 12 oz. bottled beers are indeed contract brewed at FX Matt in Utica. Doesn't matter. Brewmaster Garrett Oliver is a master zymurgist and their limited tap releases and champagne-bottled 750 mL offerings (such as Local 1 and 2, as well as the bourbon-barreled Black Ops) are some of the best beers our city has to offer. Look for: the dry-hopped saison Sorachi Ace, a perfect start to spring.

3. Evil Twin Brewing -- This feels like a bit of a cheat as Evil Twin is originally a Copenhagen brewery owned by a Dane. However, it is indeed now based out of Brooklyn, even making a terrific little canned pale ale ironically called Williamsburg Hipster Ale. Look for: Imperial Biscotti Break, an intense coffee beer perfect for starting...or perhaps ending a long tournament day.

4. Southampton Publick House -- Far out on Long island, almost too far away for a daily commute, sits a quaint little restaurant that serves the best Belgian-inspired beers around, most all available in bottles around the five boroughs. Look for: the floral and sweet (and deceptively boozy) Grand Cru.

5. Sixpoint Craft Ales -- This Brooklyn-based brewery makes a stunning array of canned ales, perfect for (ahem) sneaking into an arena to watch some hoops when you don't feel like paying exorbitant stadium prices. Don't blame Goldfarb when MSG security catches you. Look for: the skinny-as-a-Redbull-can and dank as fuck DIPA Resin.

6. SingleCut Beersmiths -- This Queens-based upstart has only existed a few months but is already blowing me away, especially with their excellent lineup of lagers. Look for: 19-33 Lagrrr.

7. 508 Gastrobrewery & La Birreria -- The city's top two brewpubs are both must-visits...while being polar opposites. 508 is a miniscule nano-pub (they call themselves the world's first "gastrobrewery") whipping up tiny batches of fermented deliciousness in the basement of a swank gastropub next to the Holland Tunnel. La Birreria is a multimillion-dollar brewpub on the roof-deck of the lavish Eataly, funded by Mario Batali and Dogfish Head, offering a view of the Empire State building (it's only a few blocks from MSG) and a fine selection of in-house cask ales made with fascinating ingredients. Look for: anything and everything. You can ONLY get these unique beers at their birthplaces.

8. Barrier Brewing Company -- These Oceanside brewers (literally) are the mad scientists of the local scene, more focused on making countless batches of novelty offerings rather than some boring flagship lineup. Unfortunately, Sandy laid waste to their facilities--now they are finally getting back into the swing of things. Look for: the Unimperial IPA, a low-ABV (4%) session beer great for tippling all day long.

9. Kelso of Brooklyn -- Brewmaster/owner Kelly Taylor is a straight pro surely responsible for more beer being drunk in the city than just about any one else (he also makes the better-than-they-need-to-be beers for the tourist trap Heartland Brewery locations). For you pilsner lovers, they make the best in the city. Look for: their clean and crisp Pilsner.

10. The Bronx Brewery -- These newish brewers from The Boogie Down don't make a lot of beers, but everything they make is damn fine. Look for: their new, toasty yet light Black Pale Ale. 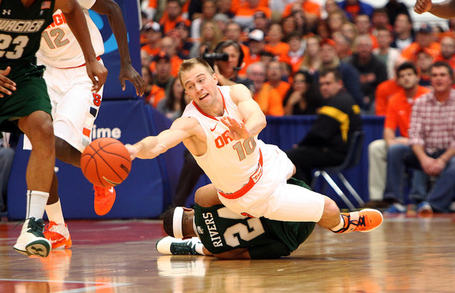 Trevor Cooney! Who said he disappointed this year?! Not I! Not when, between egregious airballs, he so generously provided the starving CNY masses with tons of Grade D ground beef carelessly dumped inside a federally-subsidized corn shell.

If you check the standings below, you'll see it was actually a three-way tie for first. Being Tacomaster General though, I decided it was up to me to set the tiebreaker: first via shooting percentage, then via points per shot. Trevor wins the title based on his flawless shooting percentage and single three-pointer. Argue if you will...