Will Syracuse Football Find A Rival In The ACC?

WANTED: A football opponent worthy of being called a rival. Are there any out there? No. Should we care? Yes. Can one be found? Yes...someday.

Share All sharing options for: Will Syracuse Football Find A Rival In The ACC?

Matt McClusky wrote an engaging post yesterday that in-part dealt with the potential for establishing new rivalries within the ACC. Since our move to the ACC was made official, many of us football fans took stock, as Matt did, regarding how this might shape new rivalries, or dust off old ones. There's been a healthy back and forth over the months about who really would qualify as a rival, and that discussion continued following Matt's post.

The topic of SU football rivalries is one that is near and dear to me personally. I myself have sat and admired the intensity of our rivalries in other sports -- Georgetown in basketball, Johns Hopkins in lacrosse -- and longed for something similar in football, where my true love lies. I've spent the last three decades watching SU spark something seeming like a rivalry with a particular school (Penn St. in the mid-to-late 80s, Miami in the early 90s) only to have it snuffed out by conference realignment, lack of competitiveness, or both. Since then we've continued along looking for a school to become a real rival, but whether it was West Virginia, UConn, Rutgers, they all seemed forced and largely fake.

During this time I've wondered, is there a formula for really knowing if your school is a rival? Can a rivalry be quantified? Well, I thought about it some more after Matt's post, and I say it can!

Bud Poliquin famously once said "familiarity breeds contempt" (Okay, I'm just throwing poor Bud a bone. No, he didn't originate the term, and let's be honest, he would probably "f" the phrase up by getting all Poliquinish and turn it into "acquaintanceship cultivates antipathy" or some other nonsense. Anyway...). The phrase itself popped into my head last night, and I feel it contains the perfect variables for being able to decipher whether a school is or is not a rival.

Get geeky with me for a sec. A common correlation can be drawn for rivalries in that all rivalries have high levels of familiarity and contempt associated with them. If you plotted schools based on these two variables, those that fall in the upper right quadrant would be qualified as being rivalries: 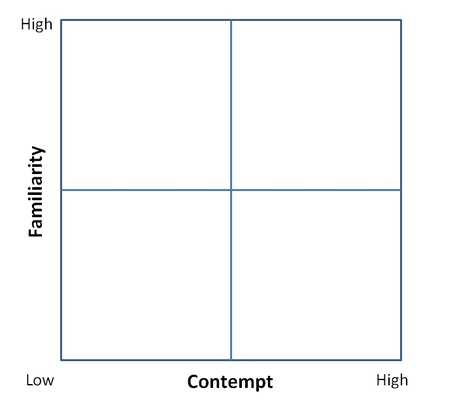 Before we map SU's opponents, let's dive into what makes up high levels of familiarity and contempt. Ask yourself the following questions about SU's opponents and see how often you can say "yes". The more "yeses", the higher the opponent is placed along the given variable.

1) Do you play the other school every season?

2) Is the other school the other major football program in your state, a neighboring state, or within a major metropolitan area?

3) Is the other school academically on par and filled with students who chose their school over yours?

4) Do several of your family members or close friends have a degree at one of the two schools?

1) Have the schools regularly played each other when the stakes were high?

To say "yes" the schools have to have a history of playing games that had direct implications to either the national championship or conference title race. Miami and Florida State, for example, seemed to be the one game from 1985 to 1995 that always put the winner in pole position for the national championship. Bottom line, the teams have to be good, and at the same time.

2) Has a notable "moment" taken place on or off the field between the schools?

On a rare occasion, rivalries are sparked by an incident that immediately creates a lasting mark on two schools' competitive spirits. The most obvious example of a rivalry truly being escalated to sporting hatred (at least to an SU fan) comes not from football, but from basketball...

I don't even need to explain myself, do I? In other instances, a local or regional rivalry can be launched into the national spotlight through a near impossible moment of magic. In 1982, Cal and Stanford took a strong rivalry and turned it up to eleven as a result of "The Play". These moments of pure inspiration and impeccable timing are few and far between, but can create or accelerate a rivalry to stratospheric proportions.

3) Is the pride of the student body and alumni meaningfully at stake when the game is played?

The best example of this type of contempt is Army v Navy, where passion (and respect) runs high, where the winners carry the glory of victory long after the final whistle, and the losers feel the weight of disappointment well beyond a rational timeframe.

4) Has there been a history of borderline criminal mischief associated with the schools?

Often, the buildup to a big game inspires the fanbase of a team to, err, take "liberties" with the property of the rival school. If an iconic landmark is regularly defaced leading up to the big game, you might generate some contempt. If a trophy marking the contest is stolen by members of the opposing school's student body, you might generate some contempt. Should Otto the Orange be kidnapped by members of BC Interruption, bound to a chair with red licorice, and painted gold, IT IS FREAKIN' GAME ON!

Applying the Model and Identifying Rivalries

So let's map Familiarity and Contempt out on a matrix to see where our ACC opponents fall. But before we do that, let's first look at a school that has high marks on both familiarity and contempt...our National Champion, The University of Alabama. 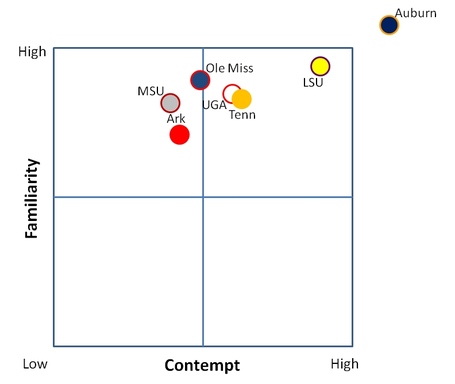 In terms of familiarity, SEC football's stability, history, and school makeup (large state institutions that dominate the sporting passions of the states they represent) lead to high familiarity across the board. The student and alumni bodies are filled with people who made their college choice between these schools, and in some cases, loyalties are developed by birthright.

The contempt levels are equally high largely due to the strong loyalty cultivated in the SEC states, and are accelerated from the success of these programs. In the case of Alabama's v. Auburn, there's a perfect mix of high stakes, familial familiarity, and even criminality that blows the rivalry right off the charts!

Time for a Reality Check

With the strength of rivalries at Alabama now serving as a backdrop, let's realistically plot where our potential rivals lie. If you look at SU's future schedule, and objectively answer the questions above, the members of the Atlantic Division (plus Pitt) would be mapped something like this: 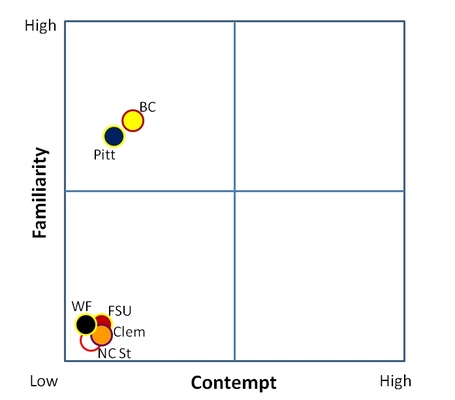 Sure, we've played a lot of football against Pitt and BC, and yes our familiarity with schools like FSU, NC State, etc would increase over time assuming Jim Delaney stays the hell away from us all. But there can't be an argument in my mind that supports that any of our ACC foes represents something near a rivalry...not now and not in the immediate future.

Where do we go from here? Will we ever have a true rival?

Like I said at the beginning of this post, I want to have a rival...someone to add a little spice to the schedule, and amp up the interest level toward our football program in general. Sure, there isn't a true rival just yet, but just because SU football's opponents circa 2013 fall short, we all know that in time, a rivalry can be born.

Looking at the crystal ball, who would be most likely to be called our next rival? My money remains on Boston College. We have familiarity through our geographic proximity, history of competition, and somewhat similar student body profiles. That's a good start. We've also set our schedule such that BC will be our final regular season game (can we say "Trophy Game"???). Yet, what we both really need to do is start winning football games, and go into our now presumed Thanksgiving weekend clashes at least two or three times a decade with the Atlantic Division championship on the line. It's not impossible.

So let's go win some football games, and hope BC starts doing the same. Oh, and BC Interruption, if you are out there, go get some Gold Paint and licorice...I dare you!