For their season theme, the 2013 Syracuse lacrosse team has decided to embrace it's inner Hunter Hearst Helmsley.

Share All sharing options for: 2013 Syracuse Lacrosse: Time To Play The Gaaaaaame

Hunter Hearst Helmsley, originally known as "The Connecticut Blueblood," urged proper etiquette an exuded a sense of upper class superiority. And in that sense, it makes perfect sense that #HHH would be the official hashtag of the Syracuse Orange lacrosse team in 2013. 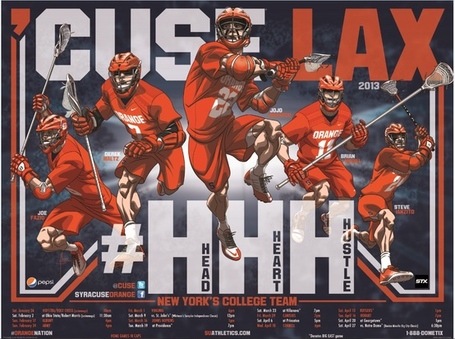 First of all, fantastic work as always by Michael Borkowski. You can see a much bigger version here.

JoJo Marasco, Brian Megill, Derek Maltz, Joe Fazio and Steve Ianzito get the nods to appear on the poster. The season begins February 17th in the Dome when Albany comes a-callin'.

I assume they're feeling the #HHH theme all season, which means we can expect the Dome lights to dim, the song below to begins to play and then John Desko emerges from the tunnel, spitting water as fireworks explode around him.