It's Taco Time in the Salt City! Jews sometimes play basketball. Frequently, they have played for Syracuse. It's a wonderful tradition.

Here's how the crafting of your weekly Taco Time entree comes about. I wake up Wednesday and write about whatever's on my mind for the next hour. (And then waste the rest of the day responding to comments.) But this week, something different happened, and, of course, Twitter is mostly to blame.

First, I found myself conversing with much-reviled Jewish person Doug Gottlieb. Next, the once-legendary Jewish Jordan began following my Tweets. Then, there was a great NY Times article on Northwestern's Orthodox player Aaron Liberman. Finally, Griffin Hoffmann Instagrammed a picture of his shoes. Though I've long lost touch with my own Jewish heritage, a clear message was being sent: Goldfarb, you east coast liberal atheist elitist bastard, you must make this week's Taco Time...Falafal Time.

Yes, I would write about the long and interesting history of Syracuse's Jewish basketball players. It's much better than you think. You could even make an argument that, aside from those legendary CCNY teams full of guys looking like Billy Crystal in saggy socks, Syracuse is THE Jewish basketball university. And I don't want to burst your anti-Zionist bubble, but methinks this blog has quite a few Jewfaced contributors itself.

Allow me to put on my Syracuse yarmulke (which should have made my worst Cuse apparel list, Jesus) and continue...

SyraJew history begins with Louis E. "Tuppy" Hayman, a three-year starter and All-America in 1931 who I'm guessing averaged like 3 points per game and couldn't jump high enough to touch the wooden net. Even though he never played football, he eventually made the Canadian Football Hall of Fame as head coach of the Toronto Argonauts, back in the day when it was easier to tell the world you were Canadian than Jewish.

Back when I was a student, catching up on Orange history, I was excited to learn of our star player of the mid-1950s. A high-scoring forward named Vinnie Cohen who eventually became a lawyer. I naturally assumed he was part of the Tribe. I always envisioned a Woody Allen type in Chuck Taylors able to finish in the post with a dazzling array of set shots. I was damn proud. Then, earlier this year while researching my NBA Jam piece, I finally saw a picture of Mr. Cohen. 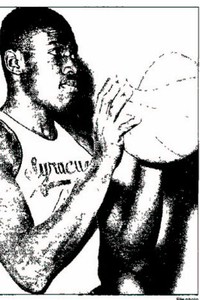 Oy vey. I'm guessing he never had a bris.

Any sort of SyraJew discussion surely revolves around the Schayes family. Dolph Schayes is unquestionably the most famous Jewish hoopster of all-time, and the Chosen People's only basketball Hall of Famer, though not a University alum. Dolph did, however, play for the NBA's Syracuse Nationals. More, importantly, he was once a good friend's landlord. He often forced my friend to do house repairs--no surprise, ever since building the pyramids, Jews have abhored manual labor--and sometimes he'd even make him watch an old Nationals VHS tape he had lying around. Oh yeah, he also sired son Danny, our school's most famous Jewish hoopster and a 18-year NBA veteran who often wore goofy goggles.

Hairy, swarthy, good with real-estate investing, RICH, and likes bad Miami house music? Has to be a Jew, right? Wrong. Though I'm guessing he's spun at a Bar Mitzvah or two. 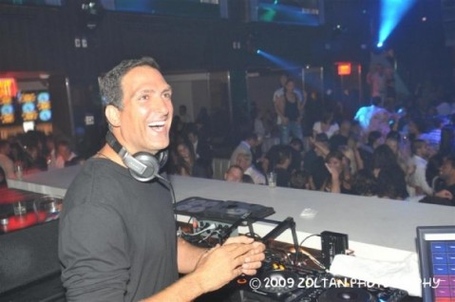 Who wants the Bar Mitzvah boy to chicken dance!

He also once said: "First of all, most of my friends are Jewish. And I went out with a Jewish girl for five years and we almost got married." So close...to marrying a JAP. 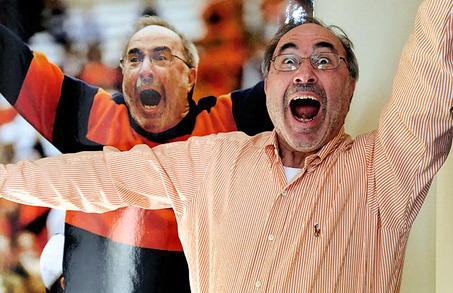 Perhaps our most famous basketball donor, if not fan, is a Long Island guy named Gold who is a condiments magnate, providing delicious horseradish for countless Passover Seders you would have rather not attended. He's attended every single game since 1996 and turned his entire Syracuse "vacation" home into a man cave. This guy oozes fandom, never complaining about having to stand or clap for too long during poor starts to games. Remember Neil as you generously spread his gluten-free deli mustard over your Hebrew National.

We, of course, eventually have to reach Bernard Fine. Long-time assistant coach. The head coach for the U.S. squad at those unforgettable 1993 Maccabi Games. Founding member of the Jewish Coaches Association. And, of course, he had his career ruined by a muckraking Jewish asshole named Mark Schwarz. And now there's even creepy anti-Semitic message boards that criticize his porcine qualities.

Walked in the dessert for 40 years and now we have to walk-on?

Of course, nowadays, now that Jews have quit growing to the heights of other human beings, Syracuse's Jewish legacy is seen in its walk-ons.

And here, courtesy of OrangeHoops, are plenty of former players who sound Jewish:

Whether they are actually Jewish, I have no clue and don't care to find out. Because, as Larry David once said:

Finally, don't forget, any negative comment...means you're an anti-Semite. 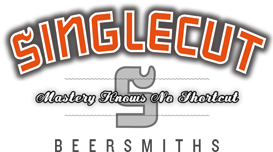 This week's recommendation to you was actually once a recommendation to me. After my Top 25 Upstate Beers post, a commenter asked if I'd tried Singlecut Beersmiths yet. Indeed I hadn't. Queen's newest, and only, brewery just sprung up in Astoria over the past few months and its meteoric rise of hype has been impressive. I finally had a growler of both their 18-Watt IPA and Full-Stack IIPA during the Super Bowl and I now understand the acclaim: the stuff is outstanding. 18-Watt is dank, bitter, and drinkable; Full-Stack beautifully citric and tropical. Both are currently tap-only offerings in the NYC area, but they will be expanding soon. Why not have one this Sunday while watching the Cuse crush that Jew-hating university from Queens?

Memorize it. It's never gonna change.

Aaron Goldfarb (Hebrew name: שמואל) is the author of How to Fail: The Self-Hurt Guide and The Cheat Sheet. Send questions or thoughts to aaron@aarongoldfarb.com or @aarongoldfarb