February 23rd's meeting between Syracuse and Georgetown is a big deal and the ticket sales seem to back that up.

Share All sharing options for: I'm Beginning To Think The Upcoming Syracuse - Georgetown Game Will Be A Big Deal

Whenever the Syracuse Orange and Georgetown Hoyas get together, it's fun times. Especially when the game is played in the Carrier Dome and Syracuse fans don't have to deal with shady, pathetic attempts by GU to keep them out of the building.

So with the February 23rd contest in the Dome approaching, I'm beginning to notice that other people are noticing that this is a game worth noticing. Don't know if you noticed.

First up, the "official" t-shirt is at the SU Bookstore: 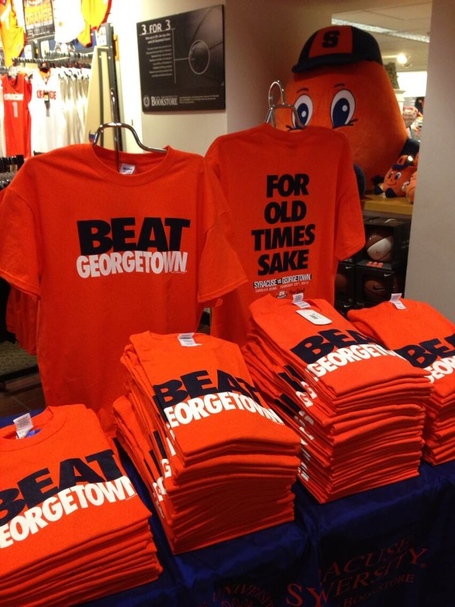 No word on when the other fourteen official game t-shirts get here, so, you take your chances if you wait.

Even if you have an official t-shirt or not, clearly you're buying tickets to the this game. I know this because we're (not surprisingly) inching closer to breaking the all-time attendance record in the Dome.

The Dome record for number of attendees at a basketball game is 34,616, when the Orange hosted the Villanova Wildcats in 2010, Maher said.

Not only is it a big game because of Georgetown but also because favorite son Carmelo Anthony is returning to have his jersey retired. It's such a big deal there are even t-shirts just for this.

So there you have it. If you ever wanted to know the magical combination for breaking Dome attendance records, just retire the jersey of one of your most famous players the same night you're hosting your biggest rival for the final time in the conference you've played in for 30 years.

We should just do that every season...