It's Taco Time in the Salt City! How did my favorite sport get so freaking boring?

It has become borderline ridiculous how often a college basketball game stops. Five timeouts per team per game, four additional media timeouts per half, plus halftime, and a fuckload of foul calls (followed, inevitably, by referee discussions or futile visits to the monitor). That's a minimum of 19 stoppages per game, before a single foul has even been called! It's gotten to the point where I become incredulous when there are several back-and-forths without a break. "Wow, there hasn't been a stoppage in like...two minutes!" Jim Boeheim always gets criticized for playing his starters too many minutes, but as he says, who could possibly get tired with all these breaks? Us fans for one. Live games have become even more boring, as you have nothing to do during stoppages but watch a fat cheerleader run around center court with a giant flag, some drunk coed shoot half-court shots to win a free Twix, or some dopey mascot throw T-shirts into the crowd that are so ugly you deserve a 0% APR/18 months credit card with them. Our last game at Seton Hall was one of the most boring prolonged two hours I've had the misfortune to be in the audience for since my parents still made me attend High Holiday services. At least at home I can flip to Buckwild during these interminable timeouts.

It's gotten to the point where officials seem to believe they are supposed to make a call on every single possession. There was a sequence late in Syracuse/Seton Hall where a foul was called on like a dozen straight possessions (in a game that was pretty much a formality at that point). You know what that makes for: EXCITING HOOPS. Throw in a series of ridiculous new rules meant to classify elbows as a deadly weapon (elbow to the face, elbow extended), monitor reviews, a stunning inability to differentiate charges from blocks, and refs unable to decide whether they are going to only call ticky tack fouls or only call attempted murders, and you have games nowadays solely dictated by the fat tubs in curving stripes. I mean, look how Kansas/Iowa St. ended on Monday. The officials at the Seton Hall game even ejected a fan in the Spike Lee seats. Who do these guys think they are?! Superstars And that over-importance of officiating has made for boring basketball where things are rarely decided by the players.

I can't wait til Syracuse is out of the Big East. Because, aside from Syracuse, Louisville, and perhaps UConn, no one plays basketball any more. College basketball, and especially Big East basketball, has become 1940s football. Three yards and a cloud of sneaker squeaks. Smart coaches with less gifted players have begun to realize the key to their success is to clog the lane with hustling brutes who shove their weight around, and trust the fact that the officials will not only not call most fouls, but will often call the wrong fouls. This turns offenses into a series of non-stop top-of-the-key moving picks, running the (overly long) shot clock down to a few seconds, and praying for miracle threes or bail-out foul calls. And 42-38 games ensue. THRILLING. Of course, this all works because...

No One Can Shoot

For some reason, college basketball fans feel they have to hate the vastly more entertaining NBA game. And, when college basketball fans bash the NBA game, their most common refrain is: "Nobody plays defense." (Other common refrains: "It doesn't matter til the fourth quarter," "It doesn't matter til the playoffs," "Lebron is gay.") These people clearly never watch NBA games. It's not that nobody plays defense in the NBA--it's that nobody misses shots in the NBA. Give a guy like Carmelo or Kyrie Irving or even JR Smith an inch of space, and you might as well have given him an open layup. Not true in college. (And sometimes when you even give Brandon Triche an open lay-up, he still manages to botch it.) CJ Fair seems like a miracle worker for being able to knock down wide-open fifteen footers. Every player in the NBA can do that. Aside from Otto Porter, Syracuse/Georgetown was a brickfest of the highest order. It wasn't that either teams' defense was all that good, it's that college players can't shoot any more. Though they sure get to shoot a lot from one spot...

Good ol' 'merican sports enthusiasts like to mock soccer for finishing tie games via shootouts, claiming that's like kissing your South American sister or something. Fair enough. But the thing is, that's how we finish college basketball games nowadays--through foul shooting contests. You can't claim the NBA doesn't matter until the fourth quarter, and then act like a college basketball game matters...before the point when it becomes a foul-shooting contest. Aside from massive blow-outs, the final five to ten minutes of college basket games are all incessant trips to the stripe. Whether it was Syracuse beating Seton Hall (or losing to Temple and Nova and Marquette)...the ending of these games solely consisted of watching men standing at a line, bending their knees, and taking set shots. I could go to a high school practice if I wanted that kind of excitement.

Finally, it all comes back to ESPN, just like it usually does. ESPN has somehow managed to make the players nearly inconsequential to the game broadcast. Crowd shots of nerdy students hopping up and down like they have to piss, close-ups of ugly coaches, tipsy announcers yukking it up and remember when-ing, pot-bellied referees dancing across the court, massive promos for next week's games that will be equally boring, and "live look-ins" at Brittney Griner breaking a record no one with a dick cares about. The actual on-court action is merely just one of the rings in the multi-ring circus ESPN is broadcasting. Not enjoying this game? Well that's all right, we'll cut back to Jason Williams in studio to hear his pick for Horizon League Defensive Player of the Year (Tweet #HLDPOYESPN to vote). Bored at having to watch three straight possession without a foul call? No problem, here's a crowd shot of Kevin Ollie's mistress eating a hot dog.

Although, the more I think about it, perhaps ESPN is smart to avoid covering the players. As I've just told you, the majority of players in college basketball are clutching-and-grabbing bricklayers who can't hit the front-end of a one-and-one once their team makes the bonus with 15:48 still left in the half. Who could imagine watching them and only them for two straight hours?

If I didn't have great beer and good game-watching buddies and funny people on Twitter snarking about all these terrible aforementioned things, I can't imagine how I'd make it through an entire college game any more. Nowadays, watching a college basketball game alone, and sober, is about as fun as...well, watching a baseball game alone and sober. 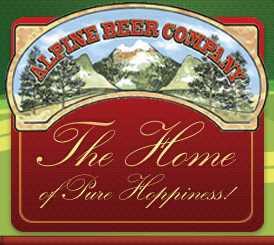 I was in Southern California last week, one of Earth's beer meccas, and I wanted to give a shout-out to a brewery that deserves far more attention...and one even some of Orange Nation's left coasters might not yet know about: Alpine Beer Co. Much like middle-of-nowhere Vermont's Hill Farmstead on the East Coast, middle-of-nowhere San Diego-ish's Alpine are masters of the IPA. I mean MASTERS. A stupid child once told me that IPAs are the easiest beer style to make, but, even if that's the case, Alpine decided to dominate at this "easy" game. They have countless "famous" IPAs, Nelson and Duet of note, Exponential and Pure Hoppiness if you come on a lucky day (I did), but the best I had was Bad Boy, served on nitro no less, which turned it into a frothy tropical explosion. (IPA haters, their Token porter was one of the best I've ever had of that style, likewise their bourbon-barreled imperial stout, Odin's Raven.) For a local brewery, I didn't see them on a single bar tap line in California, and I found only one bottle shop with any Alpine offerings, and only their most mundane (yet still delicious!) selections at that. You know what that means...you're going to have to take a drive toward the mountains and Alpine. And it's going to be well worth it.

After a basketball Holocaust of a week, it's hard to remember that, since I last rapped atcha, we actually had a third game less than seven days ago...which we won by 25, saw the walk-ons Harlem Shake (topical!) on the court, and which hit #TacoTime. Welcome to the club CJ, you are truly this year's MVP.

Only two more Taco Time opportunities left this year. Use them wisely.