Taco Time: Would Mookie Have Mattered This Year?

It's Taco Time in the Salt City! Would Mookie Jones have helped the Syracuse hoopsters this year?

Share All sharing options for: Taco Time: Would Mookie Have Mattered This Year?

I'll come right out and say it...I was never a fan of Theodore Todd Jones. Not as a basketball player, not even in that campy way where Syracuse fans were amused by him as some sort of court jester. Fact is, he wasn't a great basketball player, and--aside from being named "Mookie"--nothing about his persona was all that funny to me. I bring this up only so my next statement is more extraordinary: I think we could have actually used him this year.

Mookie was as one dimensional a scholarship player we've ever had outside of Ethan Cole (one dimension: sitting). Luckily for him, though, had he stayed, that one dimension is the dimension this year's team lacks: long-range shooting. Before the season, I hadn't thought it would matter. Who would have guessed Michael Carter-Williams would be so pedestrian from behind the arc? Who would have known it would end up being generous to call ballyhooed sharpshooter Trevor Cooney a "bricklayer"? Or that our only reliable bomber James Southerland would be suspended several games for farting on Andy Katz (as I understand it)? In the games we've offensively struggled, it's because we've offensively struggled to shoot and, boy, could Mookie shoot (a career 0.396 shooter, good for sixth best in Cuse history!)

Mookie's most underrated quality was clearly in keeping up the esprit de corps among his teammates, though I'm guessing the Mookster thinks that's a brand of once-fashionable clothing. I'm not quite sure how he found himself in such a conspicuous position, or whether it really meant something, but the fact is Mookie was THE starting lineup "greeter" for a #1 seed last year. Since his unceremonious departure, that job has gone to "Walk-On Down the Lane" star Griffin Hoffman. And the team has never seemed to be having as much fun. Coincidence? There are no coincidences when Mookie Jones is involved. 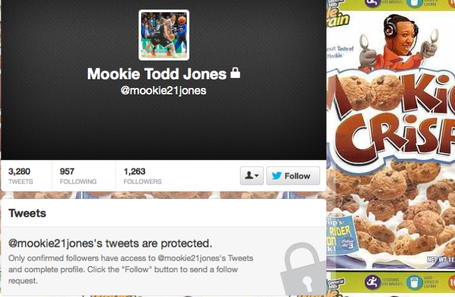 This year's team just doesn't have a social media persona that really gets my jollies going. Sure, Brandon Triche's "love me love me please love" RTs are worth a snicker and MCW is always good for some impressive candor and bluntness. But aside from that, the kids just aren't giving me anything this year that truly makes me laugh. You know Mookie would. From his "I'm Too Sexy" selfies to an ironic YOLO-ness to a surprising self-awareness, this is the one place--aside from 28 feet away from the rim--where Teddy Jones frequently delivered. He even brags about his Draw Something prowess! There's a reason Mookie's tweets are now protected...you simply couldn't handle them otherwise.

As I've discussed many times before, this year's walk-ons stink. They've scored a grand total of 8 points this season. Mookie once scored more than that (10) in 8 minutes against Providence. Now, of course, Mookie wasn't a walk-on, but walk-on minutes were frequently also Mookie minutes. Mookie was an absolute pleasure to put in during blow-outs. In fact, that's where he really shined. Garbage time is the one time a player is allowed to be selfish and just jack up shots carte blanche. A part of me suspects Mookie liked playing in garbage time more than playing minutes that mattered. I too would have enjoyed watching him at the end of cupcake games this year instead of the Keystone Kops routine fobbed off on us.

Of course, The Meaningfulness of Mookie (great book title) all comes down to James Arthur Boeheim. And I'm not sure the man would have ever even given Mookie a meaningful minute. The problem was, Mookie was too small to lolly-gag in the back line at forward, too unathletic to be a backup shooting guard. Jimmy B sure hates to play anyone who doesn't give defensive effort...and Mookie never gave a fuck about defensive effort. Yet, you have to wonder...

Would Jimmy B have given him a few minutes against Temple when we struggled to hit anything from deep? Would coach have inserted Mookie into the 3 slot against Nova after Jerami Grant had fouled out? Would Theodore Todd Jones have seen floor time in our rock fight against UConn? I'm not saying we would have won any of the games we lost were Mookie on the team--though I think Temple and Nova we might have--but it's certainly possible.

Though, when I think about, I think the answer is clearly "No" to all of those aforementioned questions and scenarios. No, where Mookie would have most shined this year is as an overrated fan favorite, a much-beloved audience ejaculation ("Mooooooooookie"), a walk-on all-star, and the one player Jimmy B could have yelled at more than that sweet kid Trevor Cooney. Maybe that would have helped the redshirt freshman's confidence and, in turn, Q.E.D. helped us find that long-range shooter. 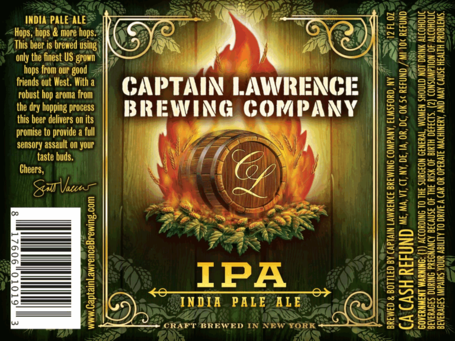 I'm out on the west coast this week drinking some of the finest IPAs the world has to offer, but my thoughts turn back to the east coast, and one of our newest in the style. Just last week, not-quite-upstate NY's Captain Lawrence released a brand new IPA, and it's a dandy. A tropical fruit explosion, very dank from an aggressive dry-hopping, and eminently drinkable. The cleverly named "IPA" stacks up with the best IPAs (Ithaca Flower Power, Brooklyn Blast, Sixpoint Bengali Tiger) that NYS has to offer. And with Captain Lawrence's extended distribution and bottling line, most all of Orange Nation should be able to locate a bottle or six.

There were no Taco Time opportunities over the last week, though the Vegas line has us +400 Taco Time for tonight. I'm not sure if that's the odds, or a predicted weight gain.

Aaron Goldfarb is the author of How to Fail: The Self-Hurt Guide and The Cheat Sheet. Send questions or thoughts to aaron@aarongoldfarb.com or @aarongoldfarb