Get Your Piece of SU History: The Ivan Foy "Win-Mill" Dance Poster!

You've re-lived the magic end zone celebration every night in your dreams...now make Syracuse football's special moment your own with this exclusive TNIAAM collectible poster!.

Share All sharing options for: Get Your Piece of SU History: The Ivan Foy "Win-Mill" Dance Poster! 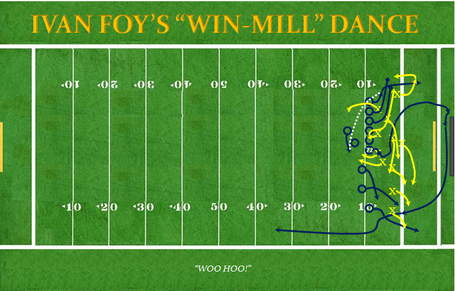 SU sports fans, can't get enough of Ivan Foy's Magical end zone celebration at the conclusion of last week's 34-31 victory over Boston College? Want to make sure you have a memento to show your grandchildren just how a 6'4" 310 pound human being could block, run, avoid field goal netting, and start a worldwide dance sensation ALL ON ONE PLAY????

Introducing the Ivan Foy "Win-Mill" Dance Poster! A one-of-a-kind keepsake for every Orange fan that shows you just how one team earned bowl eligibility at the same time one man earned super stardom! Yes, it's a horrible knock-off of a professionally-designed piece of graphic art that documented one of the greatest plays in college football history (unless you are an Alabama fan). But that never stopped the Chinese, and it sure as hell won't stop me!!!

The poster makes a great holiday gift for any Orange fan in your life. Operators are standing by!

All proceeds from the sale of the Ivan Foy "Win-Mill" Dance poster will go to the Indiana University co-ed clothing fund. Because at Indiana, clothes -- like victories over Syracuse -- apparently only come once in a lifetime.