Share All sharing options for: Indiana's Zone Inefficiency Wasn't The Only Thing That Got Exposed Last Night

The crowd from last night's Syracuse Orange - Indiana Hoosiers game is the gift that keeps on giving. There were Yankees, there were open collared-guys, there were color commentators who didn't seem to have any idea where they were and what was happening...

and then there was this Indiana lady. 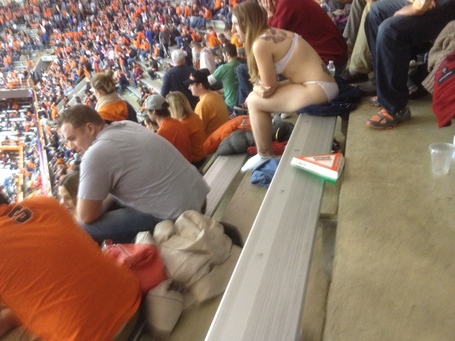 About 2 minutes left in the game I look to my right and this IU chick is sitting there in her bra and panties. I think she was sobbing a little. She had stripped down almost buck naked. As soon as the horn sounded she slipped her jeans and red IU t-shirt back on.

I would have asked her what the deal was but had to get out of there to run downhill past the 10K fans who had already left early and were going to make my 12 minute commute home take at least 15 minutes.

I guess we can consider this Operation Who Is That Girl, too.