The Oxford English Dictionary is adding a new entry for Mountaineer! Here it is:

The act of losing a football game to an opponent (typically, Syracuse) that your fan base considered to be so inferior that it was an insult to have to play them. This superiority complex is made all the more glaring by the fact that your team is historically mediocre, and by many indications fairly evenly matched to the opponent. Despite losing, feelings of superiority usually persist after the game, with comments such as, "we didn't really care about this game," "our conference is better," or, "we're in the AAU!" being employed to make up for the loss. Most perplexing, fan bases have been known to continue to refer to the winning opponent as "very, very bad." These feelings of superiority are sometimes aided by confusing conference affiliation for team affiliation.

How to tell if you've Mountaineered

Look in the mirror. If you look like this: 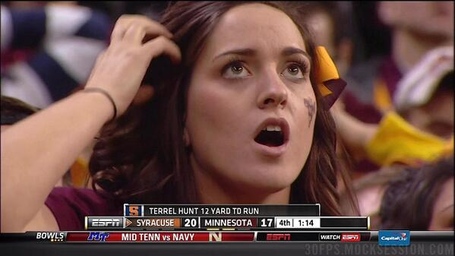 Note: any team is susceptible to Mountaineering, unless they are playing Rutgers SUNJ. Every team really is superior to SUNJ; any loss to them can only be attributed to serious mental errors on the part of the losing team.