The Quest For Belk, Week 13 Update: Or Is It A Quest For Little Caesar's, Or Beef...

The Quest is fulfilled, and yet, not fulfilled at the same time.

Share All sharing options for: The Quest For Belk, Week 13 Update: Or Is It A Quest For Little Caesar's, Or Beef...

No need to beat around the bush, The Quest for Belk, which is ultimately more about the Syracuse Orange becoming bowl eligible than it is actually making it to the Belk Bowl, has been completed! But now things get complicated... 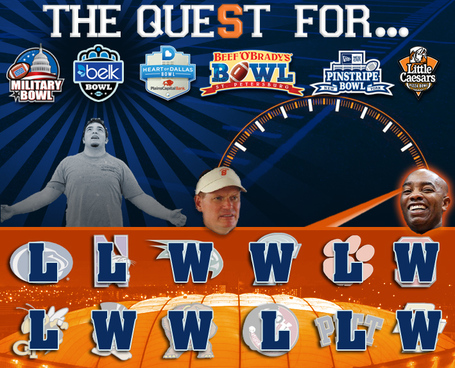 H/T: Tom C. for all his Belk photoshoppin' this season

As we've covered elsewhere, there are a lot of options available to the Orange for a bowl game. The Belk doesn't seem to be one of them. However, depending on who you ask, the Orange have a shot at the Heart of Dallas Bowl, Beef O'Brady Bowl, Military Bowl, Poinsettia Bowl, Little Caesar's Bowl and Pinstripe Bowl.

From everything I've seen and read, I'm going to assume the Pinstripe is a no-go. It's going to be Notre Dame vs. an AAC team, probably. Somehow, I also don't see us going all the way to the Poinsettia, which sounds like a nightmare for SU logistics and bowl attendance. The Heart of Dallas is the one that comes up most in people's predictions. And the Military seems possible given that the ACC will get two BCS bids, moving everyone up one spot. However, I have a weird feeling that The Quest For Beef might finally be fulfilled…a year late. But, that too is just a guess at this point.

If you want this bowl picture to get clearer, just root against Rutgers and SMU and everything will work itself out.