The Syracuse Orange football team has reached some kind of milestone. You know what that means.

Obviously, Syracuse has multiple Texas Bowl t-shirts for you to choose from. That sounds complicated. So, before you purchase your Texas Bowl participation t-shirt (to go with your Texas Bowl victory t-shirt), we'll try to help you choose the correct one. 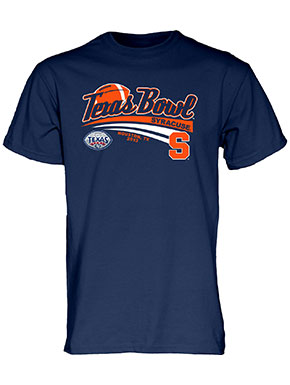 What Does It Say: Kinda seems to be saying "Texas Bowl, Syracuse," as if there's a version of the Texas Bowl that takes place in Syracuse, NY. Though I suppose there's a Texas Bowl taking place in all our hearts at any given moment, isn't there? (By the way, I'm pretty sure that football is from ClipArt).

Who Is It For: The Syracuse fan who is pretty sure this is as good as it's ever gonna get. The kind of fan who isn't worried about standing next to the SU fan wearing a Chick-Fil-A Bowl t-shirt next year. 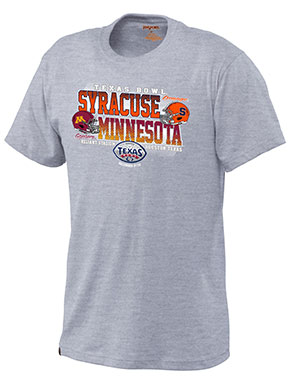 What Does It Say: That Syracuse and Minnesota are playing a football contest, most likely in Texas.

Who Is It For: The Syracuse fan who lives in Minnesota and needs something to work out in. 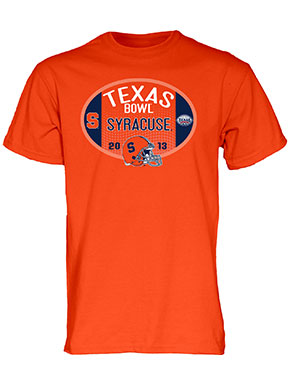 What Does It Say: The image kinda looks like a ticket stub image to me. So it's possible, although don't take my word for it 100%, that you could walk into Reliant Stadium with this on and go directly in. See how it goes and report back.

Who Is It For: The Syracuse fan who absolutely, positively will not wear anything but orange. And who also likes Arial font. 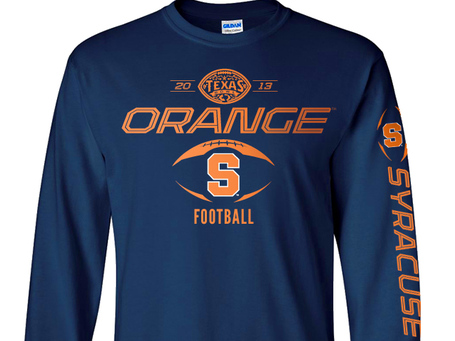 What Does It Say: I root for Syracuse from the future. Our world is like yours, but different. Kaiju roam the Earth but we still maintain our rooting interests when it comes to American college football and my personal rooting interest is the Orange of Syracuse.

Who Is It For: FutureBros. 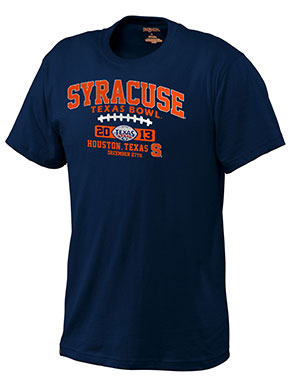 What Does It Say: That you prefer order to chaos. Look how everything is laid out. Syracuse up top to signify that you enjoy rooting interests for Syracuse, then Texas Bowl to signify that they are in fact playing in the Texas Bowl, then the year 2013 because it is the year 2013, followed by Houston, Texas because the game will be played there and not on Houston Street in Manhattan, and finally December 27 because that's the actual day Jesus was born before the Freemasons changed it that's the date the game will be played in.

Who Is It For: Sensible Syracuse fans who want to be able to answer any questions about the 2013 Texas Bowl just by looking down.

Number One: Ace In The Face 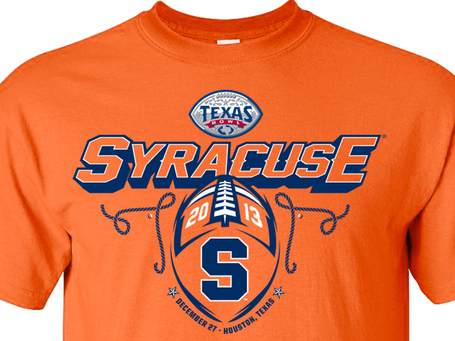 What Does It Say: HEY A**HOLE, THE TEXAS BOWL IS COMING AND HELL'S COMING WITH IT. DON'T BELIEVE ME, WAIT, LET ME WALK TOWARDS YOU SO IT'LL SEEM LIKE THIS HERE FOOTBALL IS COMIN' STRAIGHT-SHOT FOR YOUR KISSER. PUCKER UP, BUTTERCUP!

Who Is It For: Syracuse fans who also wear bolo ties.