Everything About These Photos Of Jerome Smith & Ashton Broyld Annoys Me

Photos from a Syracuse radio station might cause a secondary NCAA violation and that's just friggin' annoying.

Share All sharing options for: Everything About These Photos Of Jerome Smith & Ashton Broyld Annoys Me

Last Friday night, I saw a tweet come from the now-defunct Syracuse Legends radio show Twitterfeed that featured Syracuse Orange football players Jerome Smith and Ashton Broyld holding up a sign with a sponsor's name and logo on it. While some folks tried to rationalize that it didn't count because they didn't get paid, or something, it was obviously an NCAA violation of some kind.

We didn't hear too much about it again until today when Chris Carlson at Syracuse.com noted the likelihood that the photos constituted a secondary violation. 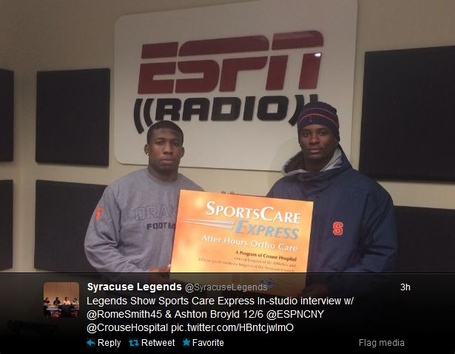 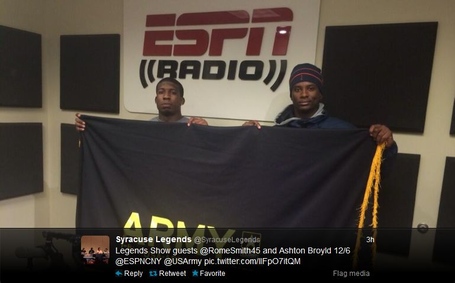 Chances are, not much will come from it. As Carlson notes, the most likely punishment is a "letter of apology, community service, a missed practice or suspension for a quarter of a game," though that last one could be a real pain in the ass if it affects the Texas Bowl.

More than anything, I'm just annoyed. I'm annoyed that we're in 2013 and, of all the people involved in this, no one stepped back and said this probably wasn't a good idea.

I'm annoyed the show's producer, who apparently took and posted the photos while host Mike Bristol was away, didn't know this kind of thing was a bad idea.

I'm annoyed that Smith and Broyld went along with it. Either because they surely knew it was wrong or, even worse, because they didn't.

I'm annoyed Syracuse didn't send a representative with them to a promotional appearance in which they represent Syracuse University to ensure that stuff like this didn't happen.

I'm annoyed that it's even a violation to begin with. That these guys are already being exploited by the NCAA and Syracuse to sell million-dollar advertising campaigns and sponsorships and that they were made to stand there holding up another sponsorship they won't see a penny for so that a radio station they're unaffiliated with could make more money based solely on their celebrity. And then it annoys me again that the players went along with it. And then it annoys me again that this producer made them do it. And then I fall down the pit of annoyance until I come out the other end numb.