Syracuse vs. Maryland: Terps Honoring Some Guy Whose Name They Can't Spell

Maryland may be honoring some other dude with a similar name for all we know.

Share All sharing options for: Syracuse vs. Maryland: Terps Honoring Some Guy Whose Name They Can't Spell

If you heard the news that the Maryland Terrapins were going to honor Wilmeth Sidat-Singh this weekend during the Syracuse Orange game, well, you heard wrong.

They're actually honoring some other guy named Wilmeth Sadat-Singh. 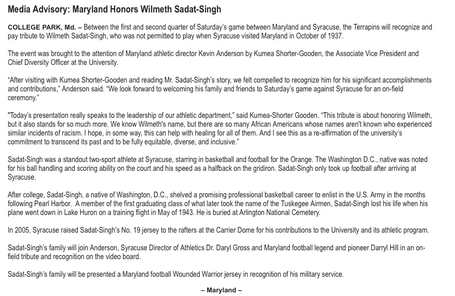 And actually, we might even be honoring some other guy named Wilmet...

I don't know, man. We're gonna honor SOMEBODY and Under Armor is going to get some great publicity out of it. That's all I know.

P.S. - Hope you read the part about how DOC Gross weaseled his way into the on-field tribute. That was an even money bet if I've ever heard one...