Share All sharing options for: What's The Deal With Syracuse Jersey Celebrations, Anyway?

I didn't watch Donovan McNabb's jersey retirement during halftime of the Wake Forest game last weekend. I know it happened, I saw the photos, I read the quotes…I figured that was that. I didn't really put a lot of thought into it after that (which, in retrospect, may have been a sign…)

And then I read Chris Carlson's takedown of the celebration (or lack thereof).

After walking onto the field to a standing ovation, McNabb watched a short video of career highlights, saw a black sheet removed from his commemorative jersey in the rafters and accepted a framed jersey from athletic director Daryl Gross.

He took the microphone long enough to offer a brief thank you to fans and teammates, then snapped a few photos with his guests and Syracuse dignitaries before handlers rushed him off the field, waving their hands to shoo him out of the way of the marching band.

The ceremony felt rushed and hurried. McNabb was surrounded by teammates, undoubtedly some old fan favorites, but the school did not introduce them to fans, leaving a mass of unidentified bodies on the field for the ceremony.

There was little that differentiated McNabb's event from from Boy Scout Troop 567's recognition during a television timeout.

Carlson goes on to compare McNabb's ceremony to those of Clemson's C.J. Spiller and Pittsburgh's Larry Fitzgerald and finds it wanting.

And you know, good point. Donovan McNabb is the most iconic Syracuse Orange football player since Ernie Davis. He's arguably the greatest quarterback in school history. If you asked national fans to name famous Syracuse alums, pretty much anyone under the age of 50 is going to start with McNabb. Surely, he deserved more than that.

Even the Don McPherson ceremony had more life to it, though perhaps that's a credit to Don himself.

An SUA spokesperson said the school simply did what Donnie wanted, and besides, he was honored at private events anyway. So, you know, hush up, you mouth-breathers.

As for what the exact answer is, I don't know. I'm not a fan of erecting statues for living people (The Paterno Rule). And I really don't want No. 5 taken out of circulation. So really, the only answer is that Syracuse simply should have made more out of the ceremony itself. If they felt rushed and hampered by doing it at halftime, do it before the game. You really think anyone is going to leave because you held the ceremony before kickoff?

I suppose the question ultimately becomes, if Donovan McNabb deserves a five minute rush job, what do people like Walter Reyes or Marvin Graves deserve? A handshake photo op during a second quarter timeout? A $20 SUpercard?

Hopefully SUA can put a little more pomp and circumstance into these kinds of events. Otherwise, we're all just going to start assuming they're simply here to give DOC Gross reasons to live out his dream of being a Price Is Right model: 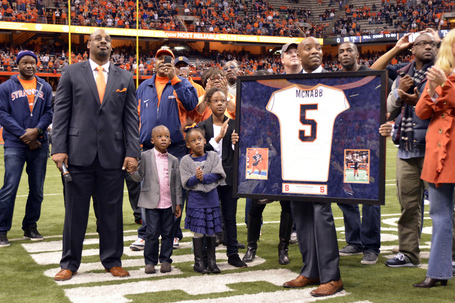 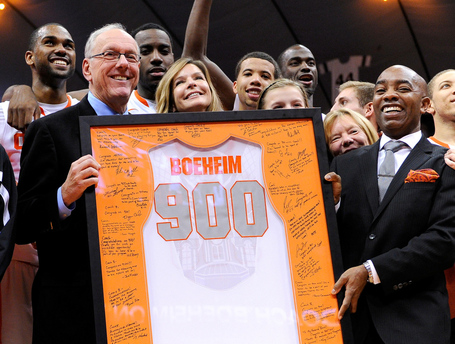 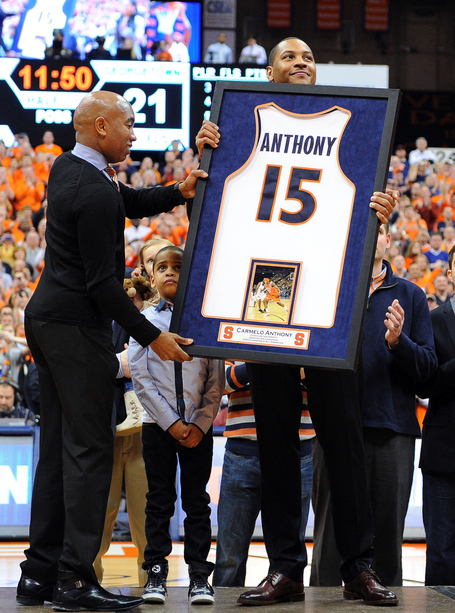 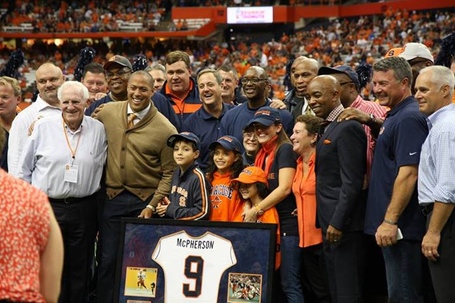 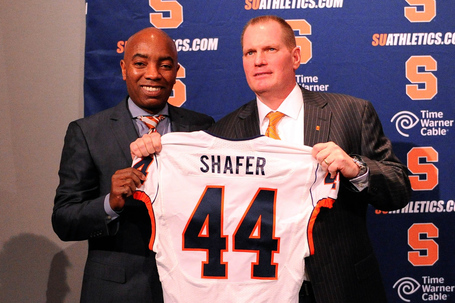