The Quest For Belk, Week 12 Update: Do Or Die Time

It all comes down to one game for the shot at any bowl, let alone the Belk.

Share All sharing options for: The Quest For Belk, Week 12 Update: Do Or Die Time 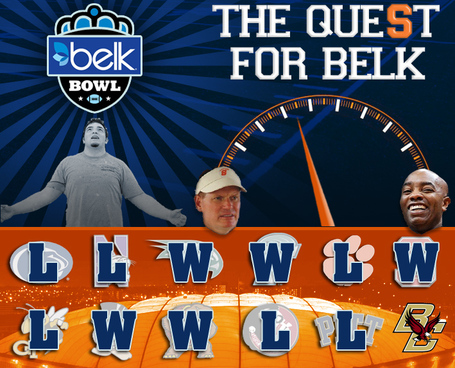 Sure, you could put it at 50%, but, you're gonna tell me you feel 50/50 about the Boston College game? You're a better contract-honorer than I.

So, does anyone still have the Syracuse Orange in their bowl projections?

One. Jerry Palm over at CBS Sports has us in the Military Bowl against North Texas. So, there's hope yet. But then again...

so, jerry palm, the CBS bracket guru, watches the Voice instead of OSU v Memphis

So, take his opinion as it were.