As expected, the Orange will have to win one of their final two games to qualify for a bowl game.

Share All sharing options for: Syracuse Football & The Quest For Belk: One Outta Two Ain't Bad 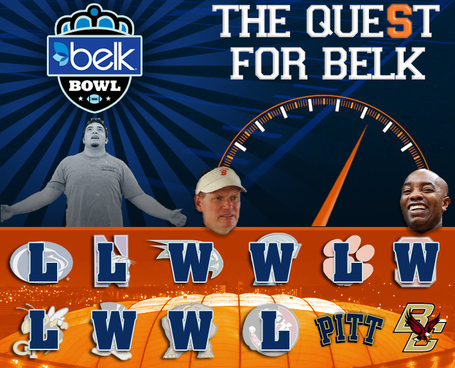 No surprise here, right? The Syracuse Orange got steamrolled by the Florida St. Seminoles and it will come down to their final two games of the season in order to get bowl eligible.

As I said last week, there's an uneasy deja vu feeling that many SU fans are probably having right now. I know I am. Both games against the Pittsburgh Panthers and Boston College Eagles look winnable but also look losable. They're both in the Dome, which is great, but that's no guarantee of victory either.

Even though the loss to FSU seemed pre-ordained, everyone seems to be dropping SU from their bowl projections like they've got a disease.

SBNation dropped us out altogether. So did ESPN's ACC blog. Even Syracuse.com dropped them from consideration.

Stewart Mandel and SI.com are sending SU to the Little Caesers Bowl in Detroit where they'll take on Northern Illinois (GULP!). There's actually a decent storyline there with the SU coaching staff's MAC history.

CBSSports.com is the kindest of projectors, sending Syracuse to the Music City Bowl to take on the Georgia Bulldogs. On second thought, maybe that's the unkindest...

Brad Edwards gives us the Birmingham treatment and sends us to the BBVA Compass Bowl to take on Houston. Mark Schlabach drops SU out of his projections.