First Meeting: Behind the solid play of Earl Twombley, the Orangemen pasted (sorry) the Raiders 33-8 in their second-ever season.

Most Famous Meeting: Hoodoo was more of a football thing so let's go with the 2010 meeting, a 100-43 thumping that was the worst beating of the 100-year rivalry.

School Connections: Colgate is Syracuse's longest-running basketball rival. The two teams have played 165 times, though they used to be a lot more competitive.

Last Year: The Raiders are coming off an 8-22 campaign, 2-12 in the Patriot League. Their season ended in the first round of the league tourney.

Last Game: Colgate got off on the wrong, yet understandable, foot with a 89-78 loss at Wake Forest. Redshirt sophomore guard Austin Tillotson scored 14 points on 6-of-12 shooting while dishing out a team-best nine assists.

"Fear Me, I've Killed Hundreds Of Timelords": Murphy Burnatowski is a real name and the person who owns it just repped Canada at the 27th FISU Summer Universiade Games. Last year he led the Raiders with 17.4 points per game, compiling 557 points throughout the course of his first year in a Colgate uniform.

Fun Fact: This is an actual page in the Colgate media guide. It's adorbz. 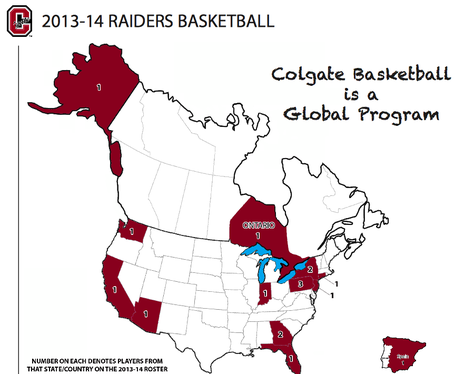