What the P-S Won't Tell You About...Florida State

It's time for the reaping, and the odds are forever NOT in our favor...So let's share a laugh, shall we???

Share All sharing options for: What the P-S Won't Tell You About...Florida State 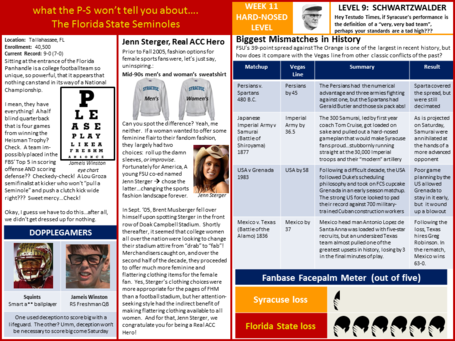 Eleven weeks into the 2013 season, and I don't think there are any doubts about what our team can and can not do. Putting aside our weaknesses, there's honestly a lot to admire about HCSS' team, not the least their ability to bounce back from defeat and keep attacking...keep fighting.

There is plenty of fight in these Orange, and and in a way, drawing an analogy to the fighting game is an apt way to summarize our season to date, as well as set our expectations regarding a Saturday date with perhaps the best college football team in the nation.

You see, Syracuse is analogous to a middleweight boxer -- a brawler -- who can do two things extremely well (move straight ahead and punch hard), while not having the ability to do much else. Against average opponents lacking an advantage in skill, cunning, or size, a brawler can succeed...by closing down the ring, punching and grinding his opponent into submission. Against a clever fighter, or one with a skill and/or size advantage, such a one-dimensional style can be easily countered, neutralized, and quite often beaten badly.

Such as it has been for SU in the ACC. A pure brawler, The Orange cornered and pounded NC State, Wake Forest and Maryland for solid if unspectacular victories. But against superior size/skill (Clemson) or cunning (Georgia Tech), we were neutralized and had absolutely no answer in blowout losses.

On Saturday, we arrive in Tallahassee to take on a college football heavyweight that seems to have more size, skill and cunning than any other opponent we've seen in a long, long time. I don't think our limited strengths can overcome such an opponent, but you can guarantee that we'll just keep on doing what we do best: move straight ahead and fight -- for four quarters -- regardless of the deficit on the scoreboard. It's the hard-nosed way...the Syracuse way.

In this week's preview, we marvel at the juggernaut that is the Florida State Seminoles. We analyze some of the other great mismatches in history, and we profile Jenn Sterger: "Real ACC Hero". As always, enjoy, and Go Orange!