The Orange are just one win from bowl eligibility…and that's got many SU football fans having flashbacks.

Share All sharing options for: The Quest For Belk, Week 10 Update: Just Win (One More), Baby

Tell me you're not feeling cautiously-optimistic about Syracuse Orange football right now.

One on hand, the Orange are 5-4, one win away from bowl eligibility with two winnable games (and the Florida State game).

On the other hand, you can't help but think about 2011. SU needed one win out of five games and lost ALL of them to finish 5-7. And while Pitt and BC look beatable, they also look like they could beat us as well.

Regardless, let's appreciate where we're at. 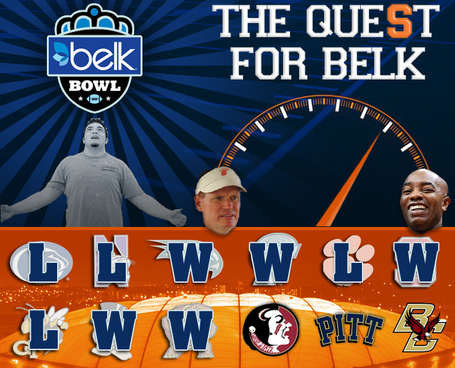 In terms of bowl possibilities, it looks like we run the gamut from intriguing match-ups to…not so intriguing ones.

Brad Edwards slots the Orange in the Music City Bowl vs. Ole Miss while Mark Schlabach goes full gonzo and sends Syracuse and Rutgers to the BBVA Compass Bowl to battle it out for NY market shares in Birmingham.

CFN says Syracuse is on track to fulfill it's Quest For Beef and take on Middle Tennessee St. in the Beef O'Brady Bowl.

Jerry Palm sends Syracuse to what many think are the most likely destination, the Military Bowl, to take on North Texas. Fun?

Syracuse.com says the Orange are headed to the Music City Bowl, though they don't provide an opponent.

SB Nation still isn't convinced that the Orange will quality. See…there's that old fear creeping back in.