Snap back to reality, oh there goes gravity. With a thumping at the hands of Clemson (thankfully) in our rear-view mirror, we shift our focus to the youngest sibling of the Tobacco Road family of schools...The North Carolina State Wolfpack.

Share All sharing options for: What the P-S Won't Tell You About...N.C. State 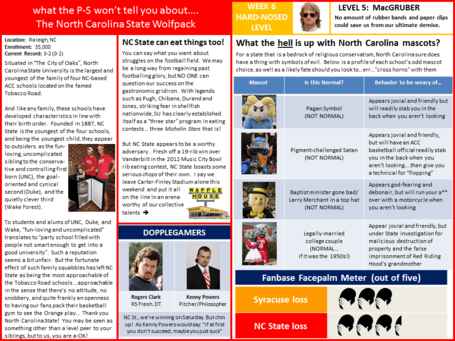 "Snap back to reality, oh there goes gravity"

If you ever wanted to see a masterclass in how to play a game on the road against an unknown opponent and their crowd, you had to look no further than the Carrier Dome last Saturday afternoon. The bell rang, and Clemson punched us square in the mouth before we could even put up our guard. They controlled us from the start, and for that one moment in the third quarter when it looked like SU had a lifeline, Clemson stopped us on fourth down in the red zone on one play, then took it in for six on the next...game, set, and match. It was awesome and sooo not awesome at the same time. Following two wins, we came back to earth with a thud.

Six weeks in, and I think we all know what we have with our beloved Orange football team. We are a team that will have to fight for every win. A team where the margin for error is exceptionally small. Fortunately for us, it seems the ACC is packed with teams that are much like ours...including this week's opponent, NC State. There will be no pushovers for Syracuse during the remainder of 2013, and The Wolfpack have shown glimpses of being a very good football team...they certainly proved to be a stronger foe for the Clemson Tigers a few weeks back. But this is an opponent who is banged up, and is reeling from a loss to Wake Forest, yet another of the many pedestrian teams in the ACC. We'll make a better accounting of ourselves in Raleigh, yet from this point forward our "reality" is that no win is certain...

In this week's preview, we profile the youngest sibling of North Carolina's Tobacco Road family of schools. We discuss our football teams' common prowess...at the dinner table. And we take a suspicious look at North Carolina's oddly evil ACC mascots. Enjoy, and Go Orange!