What the P-S Won't Tell You About...Wake Forest

Sitting at 3-4 and going in reverse, will the Syracuse University football team fix what ailed them so badly in Atlanta? Will Scott Shafer and his coaching staff make the right adjustments? Will football keep your attention from drifting to basketball for another week?

Share All sharing options for: What the P-S Won't Tell You About...Wake Forest 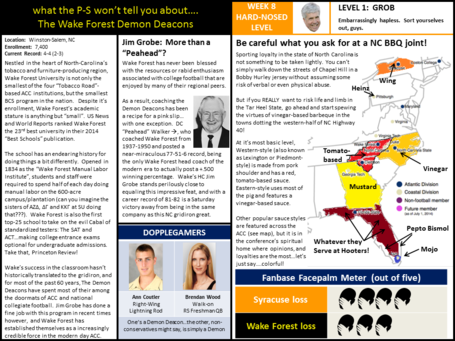 As anyone other than certain Clemson fans know, the intent of these posts is to try to offer an innocent and nonsensical laugh or two at an opponent's expense, but I have to admit, as I pulled together this week's offering, I had a feeling like the only team worth laughing at was our own. Georgia Tech was embarrassing to watch and if HCSS and his staff were trying to establish their Northern football as a credible force in the ACC, they sure chose a strange way of doing it back in Atlanta.

Factually speaking, at 3 wins and 4 losses, all is not lost for this team. I think many of us felt this would be our exact record heading into the Wake Forest game. But between our quarterbacks, poor game planning, penalties, and two recent blowouts, there are enough alarm bells going off to suggest that Syracuse is at a delicate inflection point in our season...a win against Wake Forest, and we remain very much in the hunt for a bowl game. A loss, and this team might just go off the proverbial cliff.

In this week's preview, we feature the BCS' version of "The Little Engine that Could"...no, not that engine. We call Jim Grobe a peahead (sort of), and we offer you a definitive map of ACC BBQ! Enjoy, and Go Orange!