What the P-S Won't Tell You About...Clemson

If there was ever a time to step up and announce Syracuse as a "player" in ACC football, October 5th at 3:30pm will be that time.

Share All sharing options for: What the P-S Won't Tell You About...Clemson 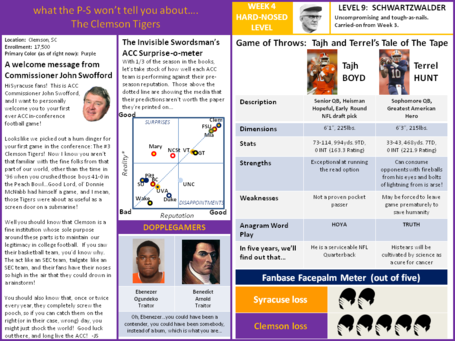 If there was ever a time to step up and announce Syracuse as a "player" in ACC football, October 5th at 3:30pm will be that time.

At 3:30pm, Scott Shafer and his Orange men will finally have the opportunity to lock the doors behind them and attempt to kick the a** of yet another highly-ranked opponent in the Carrier Dome. Though for the first time in a long time, Syracuse's opponent carries a certain cache that, should we emerge victorious, will do much more to change the optics surrounding our program than anything else in the past decade.

The 2013 storyline on Syracuse football among our nation's media has been as simple as it has been lazy...

+ Move to the ACC

Forget that Syracuse was co-conference champions in 2012 and emerged as the top team in the conference by season's end. Forget that Syracuse destroyed Louisville who, in-turn laid waste to SEC power Florida in the Sugar Bowl. Forget that Syracuse retained much of their coaching staff and returned a strong group of returning players. "No, no, and no" insisted our friends in the media, "please apply the above equation so we can move on to previewing better teams".

Now, I am not saying we are a really good football team...at least not when we are sitting at 2-2 having lost the games we were supposed to lose, and won those we were supposed to win. But I have the luxury of actually paying attention to our football program and feel like we are a decent team that is improving week-to-week. We can compete with Clemson, will compete with Clemson, and, if we really do lock the doors to the Dome and provide that hard-nosed atmosphere HCSS has been talking about since his introductory press conference, we might just rouse The Loud House, wake up the football world, announce ourselves as a program to be taken seriously...once again...

In this week's preview, we receive a warm welcome from ACC Commissioner John Swofford, review how Syracuse, and our other ACC mates are performing against expectations, and deliver the "Tale of the Tape" between Clemson's Tajh Boyd, and Syracuse's "savior", Terrel Hunt.