The Sexy-O-Meter returns just in time to save us.

On December 6th, 2008, the Syracuse Coaching Search Sexy-O-Meter was born. When Doug Marrone was hired on December 11th, 2008, we thought we'd seen the last of this highly-scientific tool used to determine who is the sexiest pick on that given day for the next Syracuse Orange football coach. We were wrong.

Doug Marrone is off to a place where the beer flows like wine and women instinctively flock like the salmon of Capistrano. And here we are, looking for his replacement. Will we find him among the list of men below? As the man responsible for the last SU coaching search used to say, time will tell.

And so, without further ado, I give you the Inaugural 2013 Syracuse Coaching Search Sexy-O-Meter! 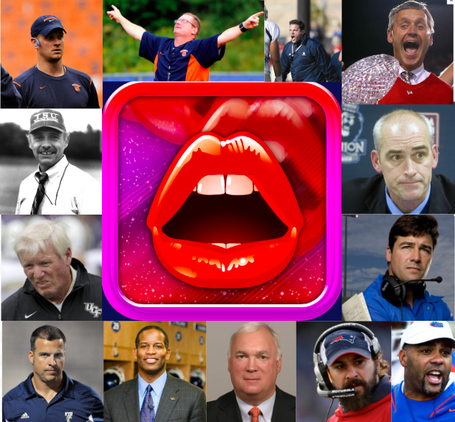 1. Scott Shafer (DC - Syracuse): Until someone tells me otherwise, Shafer has to be considered the immediate favorite. Giving him the job means the least amount of turnover, keeps the program moving, gives the architect of SU's solid defense a chance at the next level and lessens the chance that valuable recruits jump ship.

2. Mario Cristobal (Unemployed): Cristobal seems destined to be the head coach of a Northeastern football team. He worked his way up the O-Line ranks at Miami and Rutgers before taking over Florida International in 2007. He almost got the Rutgers HC job last year. He was fired from FIU after the program slipped from 8-5 to 3-9 in 2012.

3. Bob Diaco (DC - Notre Dame): Jersey-born, Diaco worked his way up the ladder at the directional Michigan schools before becoming Brian Kelly's DC at Cincy and now Notre Dame. Have you seen that defense? They're very good.

4. Nate Hackett (OC - Syracuse): Personally, I don't think Hackett is ready, but, he may hold a couple trump cards that give him a bump. No. 1, he was the play-caller for Syracuse's high-octane offense this past season. No. 2, he might be the only thing keeping Zach Allen from asking out of his LOI right now.

5. Matt Patricia (DC - New England Patriots): Patricia's got a few things going for him. He's been personally handpicked by Rob Konrad, which means he'll end up coaching Boston College in a few years. He's following in the footsteps of Bill O'Brien, who's doing well. And he's got SU history, working as a grad assistant here between 2001 and 2003. He's also an upstate NY guy, for whatever that means.

6. Jim Tressel (Unemployed): Don't mention Tressel's name in front of Pete Thamel. It's true, the likelihood of it happening are slim at best given the show-cause and other potential penalties. That said, he's won a National Title, has Syracuse ties and probably wants a chance to get his dignity back.

7. David Walker (RB Coach, Indianapolis Colts): Like having former SU players as your coach? Here's your guy. The former RB was also Syracuse's RB coach for 10 seasons before moving on to Pitt and eventually the Colts. Gotta imagine he'll get a look.

9. Tim Murphy (HC - Harvard): Longtime Harvard HC has turned them into an Ivy League power. Before that he went from 1-9-1 to 8-3 in five years at Cincinnati. He was reportedly in the mix last time and only seems to have done better since then.

10. Bobby Wilder (HC - Old Dominion): Walker has turned ODU into a consistent power and is coming off back-to-back 10-win seasons, making it to the FCS Quarterfinals this past year. He's a Maine guy, born there and worked there for a long time, so at least our longstanding rivalry with the Bears would continue.