It's Taco Time in the Salt City! Sure college basketball officiating is awful. But perhaps that's because they aren't given a chance to be good. Some ridiculous ideas for improving things.

During Saturday's bottomless brunch with Villanova, official Jim Burr slipped and fell to the floor. The way Jay Wright and the Villanova bench rushed to make sure Burr was all right, you would have thought he was a feeble, old man, capable of breaking his entire body from a minor tumble. That's because, of course, he is. And so it goes, this is who is getting paid $1000 per game game to rule over the fortunes of some of the highest (officially) unpaid athletes in the world.

Yes, we know college basketball officiating sucks. Go to message boards of both the losing and winning team after any game and you'll find plenty of legitimate gripes. We can talk about missed calls, blown calls, and outright poor interpretations of rules, but the fact of the matter is, college refs aren't even given a chance to be a great. A few completely ridiculous ideas for improving The Referee Experience. 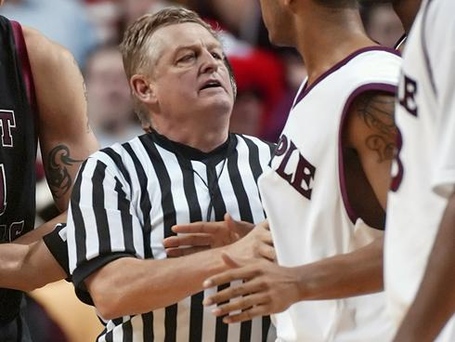 Ref should be taller

The majority of basketball action, or at least action where any fouls might occur, happens anywhere from 7 to 12 feet in the air. Yet college officials always seem to be 5'5" earthbound dumps whose majority of foul calls are ticky-tacks on the perimeter. How exactly is troll-like Jim Burr supposed to see hands quickly slapping wrists some six feet above where his bloodshot eyes reside? He simply can't. And that's why he calls fouls at a level he can actually see. You must be *this* tall to ride The Nitro, but for some reason there's no height requirement to officiate basketball. Perhaps there should be.

I noticed recently former NBA journeyman Haywoode Workman is now an NBA official. This made great sense to me. He's 6'2" so he fits my height requirement, and still at his playing weight of 180 he cuts a dashing figure in his Footlocker stripes. He's easily able to get up and down the court to get into correct position and has quickly become one of the finest officials in the pro game. An official should be nearly athletic as the players--like hockey refs are--able to get up and down the court, and, perhaps, even jump in the air to get better views of the high action...

Oscar Pistorious shouldn't be the only guy who gets to have fun. OK, so maybe it's not realistic to expect an old man who travels the backwaters of America every day for six months, staying in Clarion Inns, and eating every meal at roadside Texacos, to then be able to do his job by sprinting and jumping around a court to always have the best possible view of infractions. Then let's help the officials, by giving them those awesome spring legs that used to be in P Diddy videos. Imagine Karl Hess on these beauties: 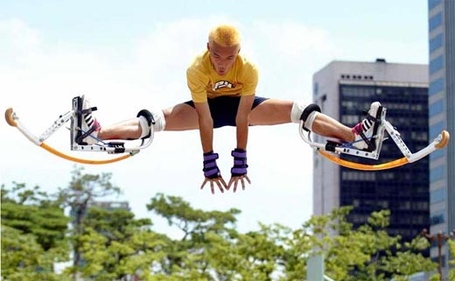 "Charging! We're going the other way!" 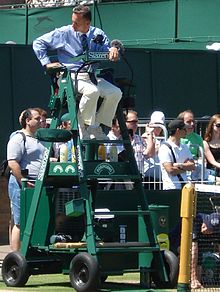 Literally the only call that can be made in a tennis match is: OUT. Or: IN. Yet a tennis match, on a court a mere 78 by 27 feet, has four eagle-eyed line judges, a net judge, "Cyclops," plus a man in a giant lifeguard chair. Yes, I'm suggesting perhaps each end of the basketball court should have an official in a high chair, well above the rim, cooly monitoring the action below while blocking an entire section of fans from seeing. We could even get Jim Burr's chair a cup holder for his vodka soda. Imagine an angry Bobby Knight tipping an official out of his umpire chair and then slinging that giant thing across the court.

Tie balls are the lazy ref's best friend. No idea what happened...JUMP BALL! Watch an NBA game sometime. There are like zero to one per game. Why? Because after every single jump ball, there's an actual jump ball. And refs with 9:30 dinner reservations hate setting everyone up around the circle and actually exerting some energy by throwing an inaccurate toss into the air. Scrap tie balls, they might be the worst call in all of sports.

Announcing calls to the crowd

Half the time after a call has been, I have no clue what just occurred. The official is dancing around, flailing his arms like someone who accidentally walked into a hornet's nest, ESPN's crew is busy promoting upcoming X-Games programming or breaking down the SEC standings even though no SEC team is currently playing, and I'm forced to go to Twitter to actually see what the call was. Football has it right, why not give the officials a tiny mic so these drunks can proudly slur out the actual call. This would not only be great for informing us, but would be terrific for subtly monitoring their sobriety levels. Of course, college basketball referee are SUPERSTARS, so they'd love the chance to hold an entire stadium's rapt attention like a National Anthem singer. Speaking of... 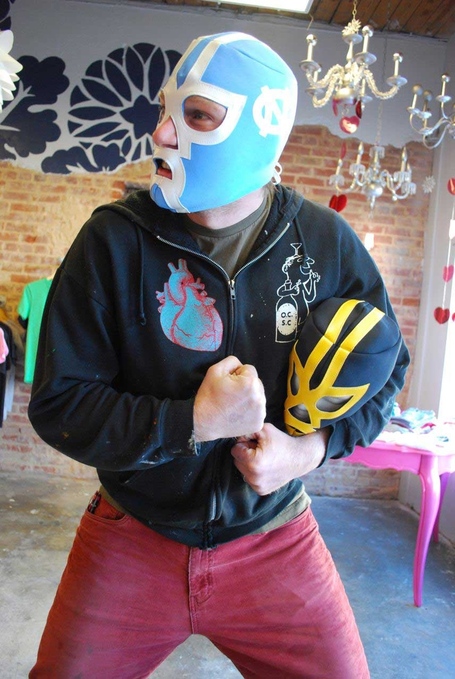 "Your official for the evening, Jim Scara--I mean, Referee X!"

Put them in masks

The crux of why college basketball officiating sucks is because basketball referees think they are superstars. They revel in being "known." In being hated. In being SHOWMEN! I mean, did you see the absolutely ludicrous way Mike Stephens rung Russ Smith up on a block call a few weeks ago? He sprinted right into Russ's face, flagrantly pumping his hands on his waist, almost taunting the poor guy as he lay on the ground.

This is not the behavior of a man who simply wants to "Get the call right." This is a man who wants everyone to see him, know him, love him, haaaaaaaate him. So let's neuter the officials and turn them into anonymous nobodies by making them wear masks like wrestling villains. No longer would we know we hated John Cahill and Ed Corbett, we'd have to say "Oh shit, we got that squat pot-belly in tight pants again. He's AWFUL." 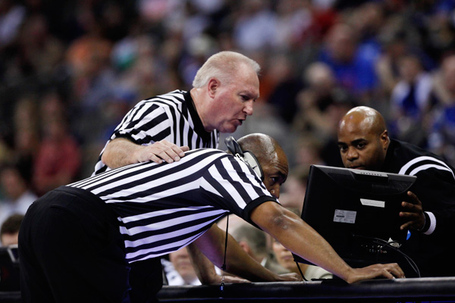 Was his foot on the line or just behind it on that last three point shot? Well let's go to the monitors. And by monitors, I mean shitty 8 inch tube televisions. How come every single time an official has to review something, their only option is to huddle around press row, squatting in their camel toe-bearing dress slacks, headphones half on their ears like DJ Pauly D, trying to rewind the TV/VCR combo back to the call they just blew? And it always takes them forever.

Mop up the court

Finally, if officials are content to be out-of-position fatasses with poor vision, they can do another job as well. Jerry Seinfeld once joked about lazy cops: "I tell you what they should do, they should combine the two jobs, make it one job, 'cop/garbage man'. I always see cops walking around with nothing to do. Grab a broom! Start sweeping. You sweep sweep sweep... catch a criminal, get right back to sweeping." Well, I'm sick of watching spindly-armed eight-years-old tasked with such an important gig. Mop boy is not a "cute" job like ring bearer or iPhone laborer. It's important. And I hate seeing our team of thoroughbreds slipping and sliding on a wet floor a stupid kid didn't Swiffer correctly. Plus, giving referees the humiliating side task of mopping the floor might also help them realize where they actually reside in this sporting contest's food chain. "Hey guys ya wanna get da floor please? Datta boy." 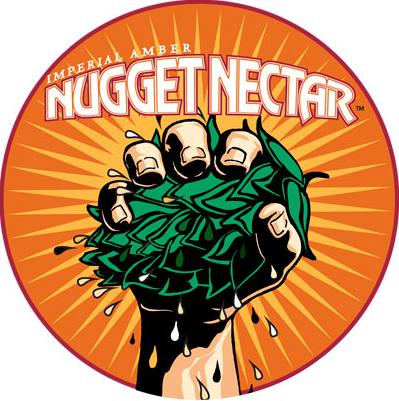 Road games always make me think about beers I could be drinking were I actually there. Playing last weekend in Philadelphia and this weekend in Pittsburgh, makes me turn to a specifically great Pennsylvania release you should be able to find in your neck of the woods. Pennsylvania is certainly in the debate for greatest beer state, what with a wealth of fine breweries (Victory, Weyebacher), brewpubs (Bullfrog, Tired Hands), incredible distribution from other states, and splendid beers bar (Monk's, Capone's). And this week brings the welcome return of the state's finest offering, Troegs Nugget Nectar.

Perhaps America's top amber ale, Nugget Nectar has the dank bitterness of a double IPA, with just enough of a sweet malt backbone to not scare off the hop-haters among you. It's dangerously drinkable at 7.5% as well. This beer may be seasonal, not from New York, and technically "limited," but most of you living in the Northeast portion of #OrangeNation should have absolutely no problem finding this on tap, in sixers, or even bomber size. A perfect contribution to your Super Bowl party. 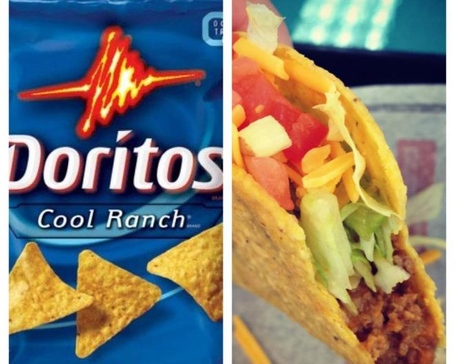 With two road games in a row, and the loss of yet another player, the song remains the same. No tacos. And, right as Taco Bell's CEO proudly hints at the release of a new Cool Ranch Doritos Locos Taco too. Exciting news for sure, especially were James to triumphantly return for Monday's tilt with Notre Dame and help net the CNY masses some Grade D ground beef carelessly dumped inside a federally-subsidized COOL RANCH DORITOS corn shell. Wait a sec, why was Taco Bell's CEO being interviewed on the CBS news?

Aaron Goldfarb is the author of How to Fail: The Self-Hurt Guide and The Cheat Sheet. Send questions or thoughts to aaron@aarongoldfarb.com or @aarongoldfarb