Like the squad they played for, Ryan Nassib, Justin Pugh and Sir Alec Lemon struggled on Sunday in the 2013 Senior Bowl.

Like the squad they played for, Ryan Nassib, Justin Pugh and Sir Alec Lemon struggled on Sunday in the 2013 Senior Bowl. The South won the game 21-16 but, more importantly, none of the Syracuse Orange on hand did too much to help themselves as they prepare for the NFL Draft.

Nassib had the most disappointing day of the three. As the North's 2nd quarterback, he went 4-10 for 44 yards, an interception and a fumble. The interception came on a pass intended for Lemon, of all people. His longest throw of the day was a 15-yard catch by Denard Robinson.

Lemon didn't see much action on the field and was unable to record a catch. Harrumph.

Pugh struggled as well, getting overpowered a few times and giving up a sack that caused a fumble. Lucky for him, he recovered the ball.

The good news? At the end of the day, what happens at the Combine and in workouts matters more. Still, you hate to stand out for the wrong reasons when so many NFL eyeballs are on you. All three are expected to be at the NFL Combine, so, work continues then... 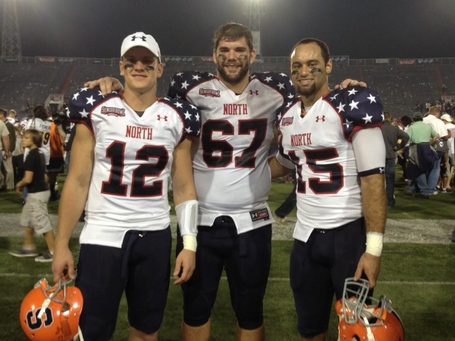 via The Pugh Crew