Taco Time: Even When ESPN Airs a Game, They Barely Show the Game

It's Taco Time in the Salt City! There are innumerable reasons to hate ESPN...but the #1 reason should be because they hardly show the game you actually tuned in to watch.

Share All sharing options for: Taco Time: Even When ESPN Airs a Game, They Barely Show the Game

Everyone hates ESPN and everyone has their own unique reason for hating them, though it probably has to do with Tim Tebow. Me, I hate the fact that even when ESPN is airing a game, they barely show the game.
Even if you've long sworn off watching ESPN programming like I have, you still have to, on occasion, tune to The Worldwide Leader to watch your favorite team play. And maybe I'm the only person in the world annoyed by this, but ESPN never shows the entirety of action on the court during a basketball game.

Take the recent Big Monday tilt between Syracuse and Cincinnati. You will not believe how many minutes of live action you actually missed. Henceforth, a breakdown of the things ESPN thought more worthwhile to place on your TV screen than the college basketball game you wanted to watch. 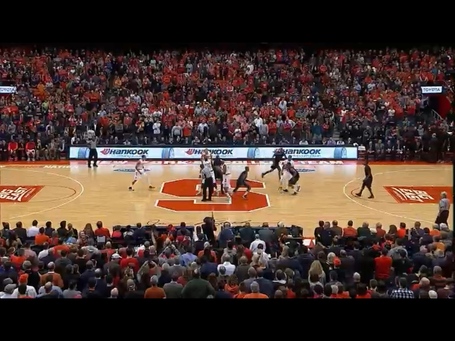 Like any great filmmaker, ESPN loves beginning with the slow zoom-in shot to set the scene. You see, ESPN thinks they are auteurs. And the bigger the broadcast, the more so. I like Stanley Kubrick as much as the next guy, but I don't need my games directed by him.

19:17-19:12 (5 seconds of action missed) -- Cincinnati Sean Kilpatrick backpedaling after hitting a three. You're going to see a lot of this. For some reason, ESPN believes the predominantly heterosexual male sports viewers watching their broadcasts would rather see close-ups of ripped, sweaty men skipping backwards than actual on-court action. 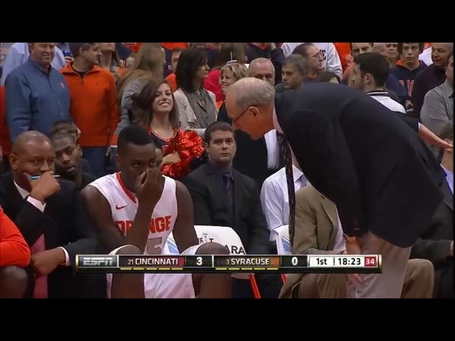 16:06-16:01 (5) -- More Wright backpedaling, plus the Cincinnati bench politely applauding. One would have never guessed that a man's teammates applaud after he scores, so it's nice to actually see proof, instead of boring shit like dribbling and passing.

13:52-13:46 (6) -- Triche backpedaling/Michael Carter-Williams doing likewise after an assist. It's almost a wonder ESPN doesn't quickly cut to close-ups of all ten players backpedaling instead of showing hoops. They just love backpedaling, truly one of the most exciting things in sports! 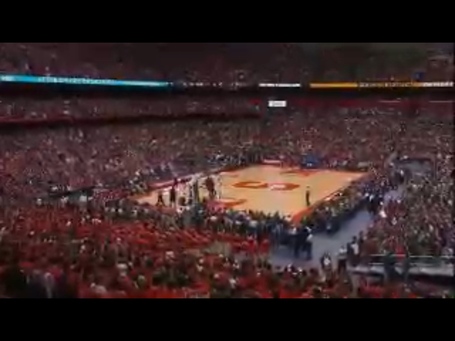 Get a load of this inbound angle! That's another thing ESPN loves to do. Now technically, I can't say any of the game was "missed," because I can see the ball and all the players--I guess--but why the fuck would any one want to watch even five seconds of play (how much they showed here) from this angle?! 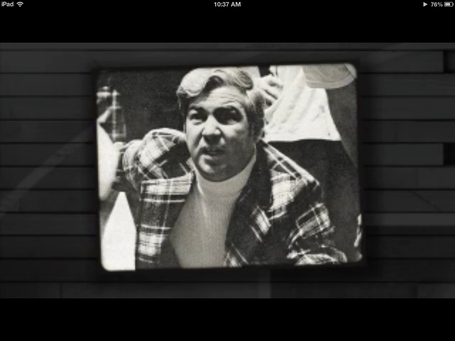 10:51-10:50 (1) -- We lose a second of ACTUAL ON-COURT ACTION while ESPN shows an irrelevent picture of national treasure Bill Raftery in a funny suit jacket from days gone by. Tirico, Bilas, and Raftery yuk it up. No one else in the world does because this isn't Joan Rivers's post-Golden Globes "Fashion Police" and THEY'RE TRYING TO WATCH A FUCKING BASKETBALL GAME. 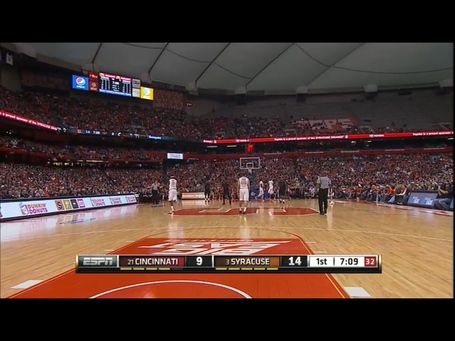 Look at this artsy bullshit during LIVE ACTION. Really gives a nice mise en scene for a terrible defensive struggle. Film scholars and cineastes will wonder for years what is trying to be said with this particular angle. Roger Deakins, eat your heart out! 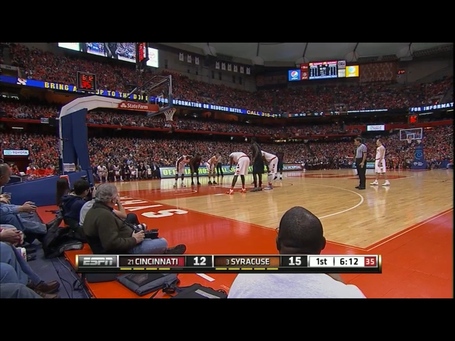 HOW IS THIS AN ACCEPTABLE ANGLE TO WATCH A FOUL SHOT?! Why is ESPN even paying an actually amount of money to this cameraman? Why does that fat guy in the olive shirt have a better seat than an ESPN cameraman? Does this joker get extra if he catches a Dajuan Coleman nip slip?! 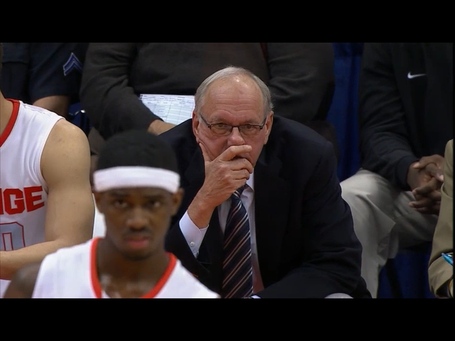 3:55-3:54 (1) -- Back from commercial to show Boeheim picking his nose instead of LIVE ON-COURT ACTION. Remember JB, you probably think they aren't filming you since, you know, a game is going on...but they are, lord knows they are!

54.8-49.8 (5) -- Several replays of the (admittedly) awesome dunk instead of showing live action of a tight ballgame. We should just feel lucky they didn't cut away to a three-minute long prepackaged human interest piece on Cashmere Wright getting his hair done at the Anthony Mason Tonsorial. 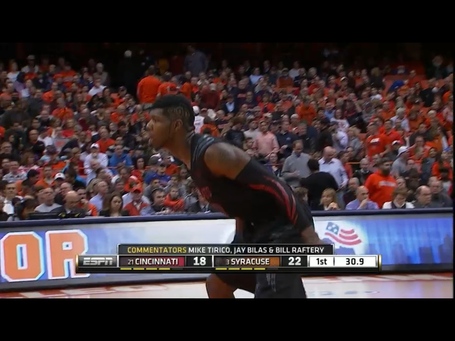 This was a low-scoring half too. Whoa is the fan watching a back-and-forth ACC shootout. Backpedal party! This production incompetence is even more exacerbated when facing a known pressing team (say...Louisville) and an unprepared ESPN still cuts to the backpedaling players as opposed to a closely guarded in-bounds (which is often stolen, put in for a lay-up, and re-inbounded before the auteurs at ESPN have even cut back to the ball).

You would think ESPN would be a well-oiled machine by now. But, if they are, they're oiled by K-Y Jelly.

Hmmm...intriguing. The first half had backpedaling cutaways that seemed to average 6 seconds or so, but so far the second half's seem to only be a mere 4 seconds. Is their some second half dictum toward shorter cutaways?! Terrific.

16:34-16:32 (2) -- Parker backpedaling after a made bucket, only causing us to miss 2 seconds of live action due to Boeheim instantly calling a timeout and "TOTALLY FUCKING UP MY CINEMATOGRAPHY! You're cockblocking my directing, JB!" --ESPN Producer who thinks he's Robert Altman

16:11-16:08 (3) -- Inexlicable shot of Wright on bench. Shockingly, still no prepackaged piece about what the hell Wright's hair design is. 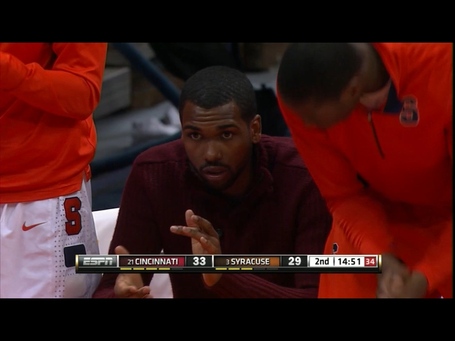 14:39 -- A millisecond of an inbounds missed to show a Trevor Cooney made bucket. 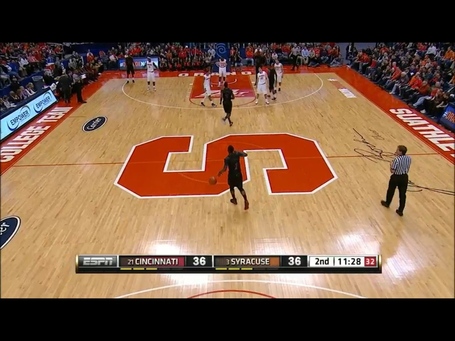 Sometimes ESPN likes to show a fucked-up angle for an ENTIRE possession, especially if it's to show Syracuse's "vaunted" zone setup. This is terribly jarring, like when you accidentally get off the default angle while playing a sports video game. Does ESPN think there are people in this world that enjoy basketball but are just bored with the passe sideview presentation? 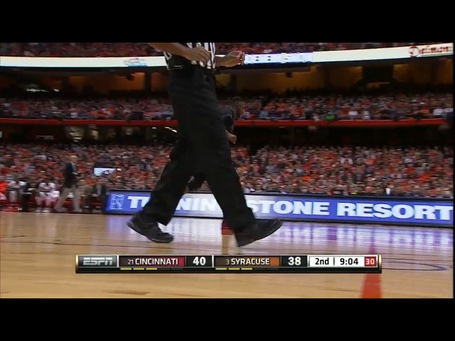 Check out this dumbass camera angle that went on for several seconds during, yes, LIVE ACTION. While we're technically not missing any play, why do I want to see the ball brought up court courtesy of Breaking Bad's Roomba cam?

8:24-8:17 (7) -- Replay of a fairly irrelevant, certainly indisputable, and completely boring fumble out of bounds. This is particularly egregious as we miss the start of a Parker drive to the hole for a made bucket! 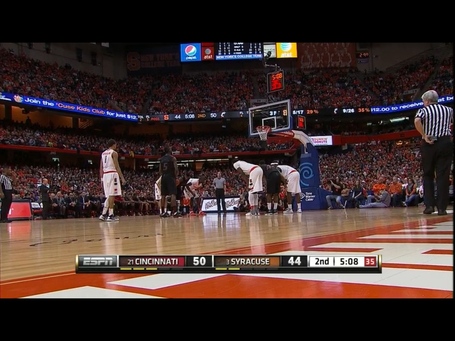 Another shot from Roomba cam.

This is why the big, "important" ESPN games are so awful. ESPN obviously devotes a large budget to them, brings a boat-load of cameras and crew and thinks you want to see all the stupid bells and whistles they can provide. But, I'll gladly trade Bob Wenzel's trite observations and SNY's one camera angle for ESPN's five zillion cameras and overzealous cuts.

4:51-4:46 (5) -- Triche backpedaling as Tirico talks about his "personality," hoping to land him a date or two. "Brandon likes ReTweeting compliments, keeping a poker face, and his Soloflex."

This is what Dome denizens look like dancing to "Hey! Baby": 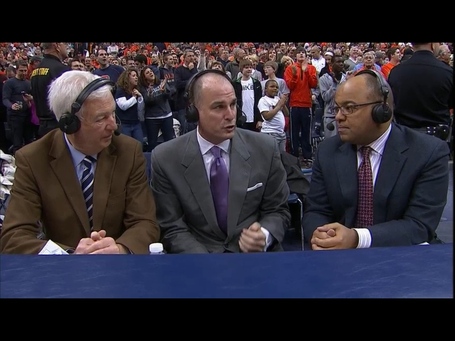 I don't want to know if any of these people want to be my girl. Raftery, Bilas, and Tirico plug an upcoming program instead of discussing the heated ballgame which only has seconds to go.

2.5 -- And here we come to ESPN's coup de grace. Their fucking Starchild shot of the whole broadcast. With an incredibly important front-end one-and-one foul shot in a 2-point game, this is the camera angle ESPN goes with from the time Brandon Triche recieves the ball from the official all the way through as he shoots, misses it, Cincinnati rebounds it, and then calls time out: 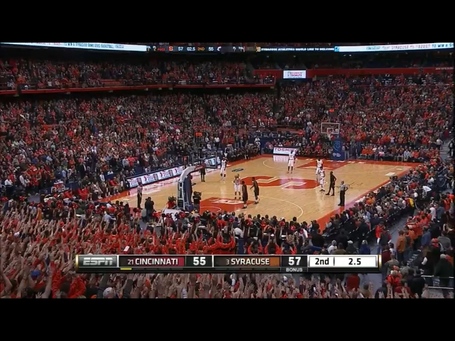 I always want to watch important plays from the worst seat in the house! In fact, it's why I usually watch games on TV instead of heading to the arena...because you can just never get those worst-seat-in-the-house tickets.

We missed 3 MINUTES and 7.6 SECONDS OF ACTION!

Nearly 8 PERCENT of the game!!!

In no other sport, save maybe soccer which of course doesn't have timeouts, is it acceptable to miss even a second of action. A college basketball game has twelve total coaches' timeouts, eight total TV timeouts, plus a lengthy halftime. You'd think ESPN could find plenty of time to show replays, coaches' wives in the stands, Bill Raftery "Remember Whens," and promote other programming...but no, they'd rather do all that during the forty live minutes of action you actually care about.

ESPN is the worst.

But what do you hate most about ESPN's game production?

Last week's column was such an unequivocal hit (a rarity for Taco Time), I thought I'd start recommending a new and local(-ish) beer I've enjoyed recently to pair with your game-watching experience.

This week's brew is the newest canned release from Brooklyn's Sixpoint. The three beans of the name are Mast Brothers Chocolate cacao husks, Stumptown Coffee Roasters beans (cold-brewed, then infused), and of course barley. The beer is then aged on oak to create a hefty 10% ABV Baltic porter that is still surprisingly light and drinkable. For the price and accessibility, outside of Founders iconic Breakfast Stout, I'm not sure you're going to find a better coffee beer. Perfect for Saturday's 11 AM start. I pity you West Coasters.

Will we ever score 75 points again? What are we supposed to sustain ourselves on? Come back, James, you're our only hope for once again netting the CNY masses some Grade D ground beef carelessly dumped inside a federally-subsidized corn shell. A reminder of the current standings, which may be the final ones at this rate:

Aaron Goldfarb is the author of How to Fail: The Self-Hurt Guide and The Cheat Sheet (free on Kindle today). Syracuse basketball is the only thing he would ever write about for free. Send questions or thoughts to aaron@aarongoldfarb.com or @aarongoldfarb