What the P-S Won't Tell You About...2012 Syracuse Football

From the standpoint of tremendousness, the 2012 SU Football season was...well...pretty tremendous. As we recover from our post-Pinstripe hangover and hold our collective breath over the fate of Doug Marrone, let's take a visual look at some of the notable moments of 2012

Share All sharing options for: What the P-S Won't Tell You About...2012 Syracuse Football 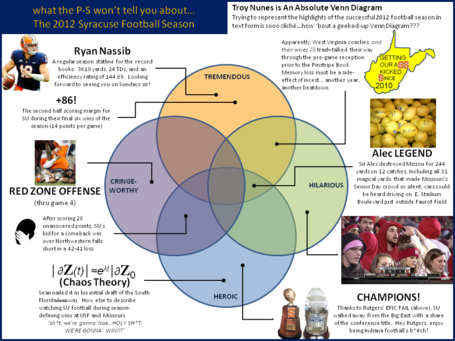 Let me start this post with an apology to those who were waiting for the West Virginia preview that never came. Much like Dana Holgorsen, I spent the weeks leading up to the Bowl game with my finger up my -------- and just didn't get the work in on time. Won't happen again...it's a shame, I had a great Yukon Cornelius joke ready for your enjoyment...

Ahh, 2012. A season that had us moving from hope to despair, back to hope, then despair, over to hope, and finally delight as we raged through the second half of the season and repeated our 2010 snow-filled romp in the Bronx!

The season left us with a number of positives, perhaps none more so than a sense of certainty that our program -- once left for dead -- has definitively come off the mat and is back in good health. We walked away from Yankee Stadium with 8 wins, a record-setting offense, a never-say-die team spirit, and an incredibly bright future ahead for us in the ACC. The unknowing among the college football world may still see Greg Robinson's face when thinking about our Orange, but that's just fine by us...we'll happily knock you around seven ways to Sunday and take your lunch money while you wonder what the hell just happened (Hi Missouri and West Virginia!).

As we enter the first days of 2013, it's sadly fitting that the certainty of our program's re-emergence has to be juxtaposed with the uncertainty of our coach's immediate future. We'll hope that Doug Marrone's heartfelt love for Syracuse will compensate for the riches of the NFL that Doc Gross would surely not be able to match should a pro team come calling.

Should he go, at least the next coach will have a solid base from which to start.

Should he stay?... I think we're on the verge of something special on The Hill.