Taco Time: What Would Piss Off Syracuse Fans Most?

Time for It's Taco Time in the Salt City! You can take away our curse-songs, but you'll never take away our freedom! But what provocative things could I say that would truly piss off the Syracuse faithful?!

Share All sharing options for: Taco Time: What Would Piss Off Syracuse Fans Most?

Happy New Year! Have you broken your resolution to not get angry at what Doug Gottlieb says yet?

Last week's #TacoTime, on what I thought was a fairly sedate topic, got a slew of comments, just as many pro-me as were anti-me as were kill-yourself-me. To quote orangmen315: "The best part about this thread is that it reveals we Syracusans to be an irrationally proud people. We don’t always know what we are defending or even why but say anything about Syracuse and you will find one of us ready to take the other side of the argument whether we believe it or not and in the most defensive hostile tone we can muster."

He's right. No matter what I write, there's always gonna be some commenters that lose their shit. So why not reaaaaaally make them lose it, Gottlieb style? In theory, what would be the most provocative future columns I could write? Some attempts...

The Pinstripe Bowl pre-game party at Billy's Sports Bar in the Bronx was first class. A first class anti-fashion show. Men in oversized Jinco jeans with Orange-patched bomber jackets. Women with Orange sweatshirts so large and baggy I confused them for our own mascot. And the mustaches! Oh my god were there a lot of mustaches! (And not of the ironic hipster variety, these were straight Andy Reid dusters.) Charney's Roger Springfield Collection was in full-display on Saturday, and I was there to iPhotograph it and carefully assemble my top 10...which you might even be a part of. Though, I'll be honest: wearing some cable-knit mittens I borrowed from my girlfriend, an orange & blue Broncos hat turned inside out (which I was trying to pretend was Syracuse-branded), and muddy workout cross-trainers, I was probably the poorest dressed of any one. 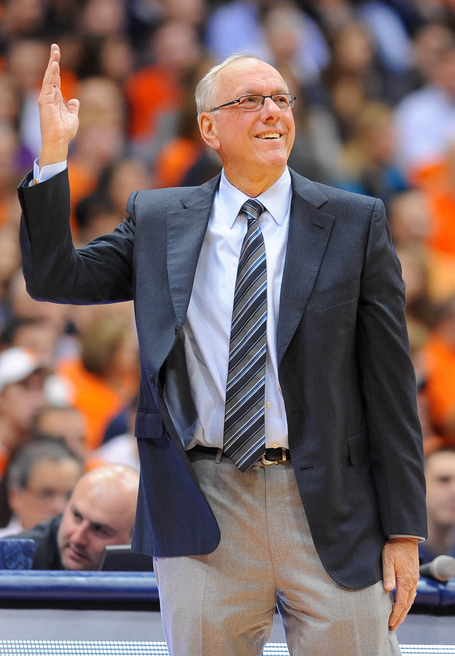 Speaking of high fashion...he may be GQ: CNY's annual best-dressed man of the year, but Jim Boeheim is truly a sartorial nightmare. Admit it. Announcers and fans love looking at old pictures of JB in his houndstooth jacket and Larry King glasses, cracking wise, and pretending he used to dress like crap. They're fond of noting, "Boy, his wife Juli sure cleaned him up!" Like he was once a Marshall Street beggar and is now a cross between Pat Riley and Roger Sterling. But the fact is, James Arthur still dresses terribly. Poorly-tailored Rochester Big & Tall shoulder-padded silver jackets with mismatched large-pleated charcoal pants and a pair of spit-shined Rockports. And don't forget his indoor/outdoor Blu Blockers. Just because he's the only man in town with an American Express card and a personal shopper doesn't make him Salvatore Ferragamo. 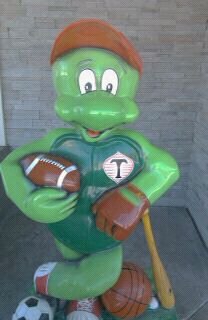 Though probably a more-beloved institution in the Salt City than even Newhouse or Maxwell, Tully's Good Times is flat-out awful. The flagship location on Erie is a crummy arcade meets deep-fried feeding sty. Their "smothered" and "loaded" food is completely lackluster, their TVs poorly placed, the room overly lit, and even the gratis popcorn tastes like packing peanuts dragged through dirty sea water. Tully's is only worth going to if for some reason you like drinking at sports bars with more children in them than a McDonald's ball pit. Good Times, huh? Not to mention, their mascot makes Grimace look like a sophisticated product pitchman. 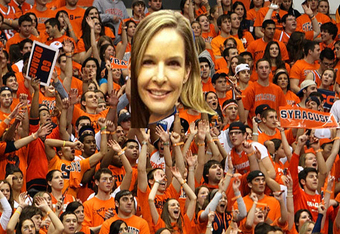 Juli Boheim is Not Attractive

The ESPNU cameraman scans the crowd past the people standing and clapping and those yelling at the aforementioned, eventually locking it down and zooming in on a would-be MILF in a Talbot's cowl-neck sweater. As she appears on the Jumbotron, every male in the Dome applauds raucously, placing their Sbarro's SuperSlice over their now-burgeoning erections. Drunk fans watching in sports bars slap their friends on the shoulder with a back-hand and a nod toward the TV, noting something crass with the word "bang" featured prominently. It's of course the first lady of Syracuse athletics, Juli Arthur Boeheim. Syracuse fans act like we've never seen a mildy-attractive woman before. Do none of us own cable or highspeed internet? Why is a 40something mother-of-three with out-of-style bangs and good seats being slobbered over like she's Kate Upton? Do we simply like JB so much we want to actually be his schlong? Let's be honest, if Jim lived in a bigger city, he'd be "banging" reality show starlets left and right and his trophy wife would be an actual trophy--not an NIT runner-up. I say: it's not Jim, it's Juli who's punching above her weight class. 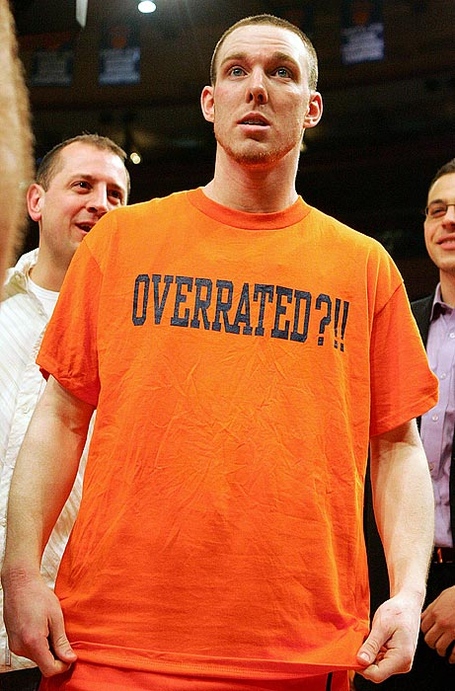 Look, just because we wouldn't have won ten f*cking games without him, doesn't mean we couldn't have won more with someone better than him. Like say...his way underrated and far superior teammate Hakim Warrick. But Gerry is untouchable in Syracuse lore, a hard-working, non-tattoed, white gunner with a haircut you can set your watch to and such a knack for hitting big shots that you forgot about every other miss that happened beforehand. At least his wife is truly hot.

But, I'll never write any of those columns. Because I like you guys and I love Syracuse and I don't even believe the above. (And I'd probably get death threats if I wrote that GMac one.)

What is the most provocative topic you can come up with?

While enjoying Syracuse's Pinstripe Bowl rout over West Virginia--and marveling how high-powered our offense has been this year--I couldn't help thinking: Why is there no Taco Time for football? I raised the point and a debate sprung up in the stands. How many points would net it? (I say 35.) What would the CNY masses win? (I say a burrito.) Should we be eating so many burritos? (I say turn it into a salad bowl instead, skipping the tortilla carbs.) But what do you think?

The night of the Pinstripe, the hoopsters put up a pathetic effort against Alcorn State, almost as if they didn't want to net the CNY masses some Grade D ground beef carelessly dumped inside a federally-subsidized corn shell. Luckily, the team got off it's schneide against CCSU, and the Senegalese Sensation delivered his team-tying second #TacoTime of the season.

One final note: my book of essays Drunk Drinking is currently free today on Amazon. Grab a copy.

Aaron Goldfarb is the author of How to Fail: The Self-Hurt Guide and The Cheat Sheet. Syracuse basketball is the only thing he would ever write about for free. Send questions or thoughts to aaron@aarongoldfarb.com or @aarongoldfarb