It's Taco Time in the Salt City! Satire, bad. Lists, good. Beer, better. What are the region's top brews?

Last week in the comments, several people told me to more clearly note when I am writing comedy. Which we all know is the hallmark of quality humor (THIS IS SATIRE RIGHT HEEEEERE ----->) A better suggestion was that I discuss local beers. In fact, one of the few things I like as much as Syracuse basketball is craft beer. In another life I used to write about it and I'm still seeking out and drinking the good stuff (if you care to beer-stalk, you can friend and follow me on Untappd).

In my recent book of tippling essays, Drunk Drinking, I ranked New York the third best beer state after California and Colorado--and that nebulous area known simply as "upstate" is responsible for a good portion of that. Allow me to go drunken Ron Morris on you, with my selections for the 25 best local brews to drink while rooting on the Orange. 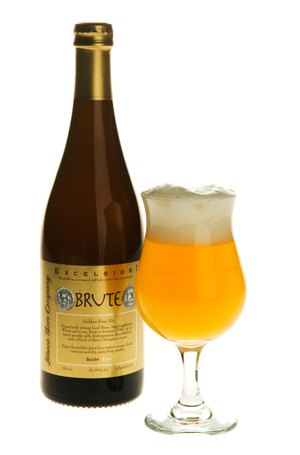 1. Ithaca Brute -- My pick for upstate New York's best beer is also my selection for the entire state's best beer. This incredibly fizzy sour ale may be limited, but so are three pointers as of late. 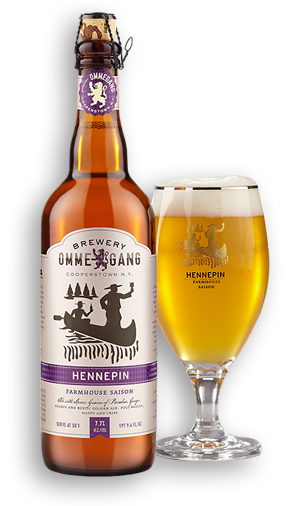 2. Ommegang Hennepin -- Before the rash of saison-only breweries started popping up (Stillwater, Funkwerks, and Jolly Pumpkin of note), this beer out of Cooperstown was America's best saison offering, and your average Joe's introduction to the style. It still holds up.

3. Southern Tier Pumking -- It may or may not be the world's best pumpkin beer (I'd nominate Avery's Rumpkin), but it's certainly the easiest to find and its price per ABV is second to none (if you're into that kinda thing--and by "that kind of thing," I mean: getting drunk cheaply). Sean and I discussed pumpkin beers on his podcast back in November. He complained that pumpkin beers never actually taste like pumpkins. He's right--because straight pumpkin tastes like shit. Pumking, however, tastes like you want it to: gooey pumpkin pie with a dollop of Cool Whip. Serve up a helping or two during a cold tailgate. 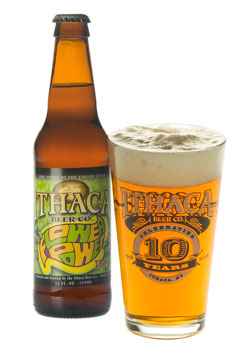 4. Ithaca Flower Power -- Our state isn't exactly known for it's IPAs--stick to California or Vermont for those--but fresh Flower Power is as good as any. It's my tap beer of choice when game-watching at the East End Bar & Grill. Flower Power's tropical bitterness pairs perfectly with falling behind early against a team we should beat.

5. He'Brew Vertical Jewbelation - It feels like a bit of a cheat to slot this NYC and San Francisco-based company here, but, indeed, its beer is brewed exclusively in Saratoga Springs. (You might come back at me and say that a lot of "downstate" beers such as Brooklyn Brewery's bottled selection is contract-brewed at FX Matt in Utica. But whatever.) This Sazerac rye barrel aged blend of previous Jewbelations pairs perfectly with walk-on Griffin Hoffman checking into a blowout. 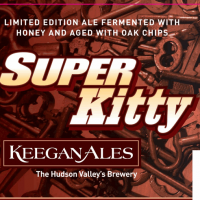 6. Keegan Ales Super Kitty -- Not exactly a brewery that typically distinguishes itself, Keegan Ales' honey-fermented, oak-aged, limited-release Super Kitty is still a boffo booze bomb. At 12%--and hitting shelves this very week--it's a perfect antidote to steel your nerves for a road game against the #1 team in the nation. 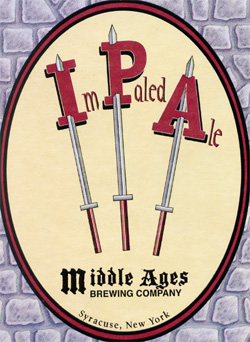 7. Middle Ages ImPaled Ale -- I still have no idea why our most local brewery--just 2 miles from where the great man plies his trade--has yet to brew a Jim Boehemian Pilsner, but perhaps one of these days the lightbulb will go off. Until then, their English IPA is a top-notch offering, especially when fresh, even better when served on cask.

8. Cortland Beer Company Flight Level 410 Bourbon Barrel Aged -- I'd honestly never even heard of the CBC when someone put this bottle in my hand, but that hardly matters as this bourbon barrel aged barleywine completely slayed me. I have no idea if any of their other beers are worth a damn...but this one was worth a Uma Thurman in Pulp Fiction "I said goddamn! God. Damn." 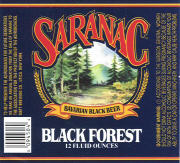 9. Saranac Black Forest -- As your beer knowledge and bank account expands, you kind of forget about the well-priced old-timers from Saranac. Perhaps you shouldn't. Their PR team sent me a Christmas sampler back in December and I enjoyed the heck out of many of their brews, none more so than this schwarzbier. There's a schwarzbier joke in here somewhere, but I won't make it because I'm not racist. And I'm told satire is a dying art.

10. Vanberg & DeWulf Lambrucha -- Like He'brew above, this also feels like a bit of a cheat, especially since Vanberg & DeWulf isn't even a brewery. Nevertheless, this legendary Belgian beer importer does produce two of their own beers (Lambickx as well)--both coming out of lovely Cooperstown. Effervescent and low in alcohol (a mere 3.5%), this highly-unique lambic/kombucha blend is a perfect pre-game brew for those annoying noon starts.

I'm sure I missed others. Go ahead, complain in the comments. Or better yet, tip me off to those tiny brewpub-only selections I've yet to try.

With James Southerland stuck on the bench in his pajamas, the vaunted Orange were unable to reach Taco Time in their one contest last week. I hope everyone budgeted correctly.

Aaron Goldfarb is the author of How to Fail: The Self-Hurt Guide and The Cheat Sheet. Syracuse basketball is the only thing he would ever write about for free. Send questions or thoughts to aaron@aarongoldfarb.com or @aarongoldfarb