Technically, the status of several Syracuse football players omitted from this year’s media guide remains officially unresolved. However, there is a lot of good news on the horizon.

As for highly-touted freshman RB George Morris III, he took to Twitter last night and posted a bunch of photos of his camp gear. While it remains unclear if he can actually put them on and hit people while wearing them, at least we know they're close enough that they'd give him cleats. 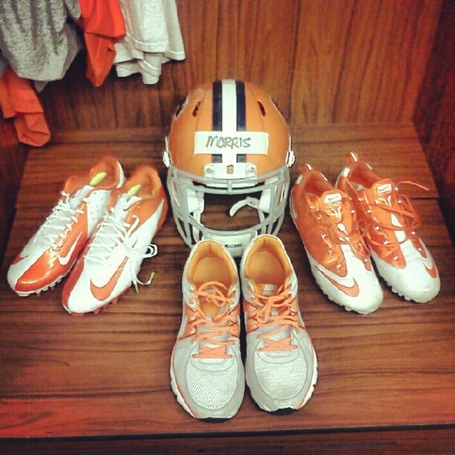 The two biggest transfer questions have been former Arkansas Razorbacks WR Quinta Funderburk and former Iowa Hawkeyes DL John Raymon. We heard that they were coming and then radio silence since. Until now.

Funderburk's high school coach told Nolan Weidner that his former protege is in Syracuse and will be in camp:

"He’s going to be attending Syracuse. He’s up there now. I think they start Monday," Richard Morgan, Funderburk’s coach at Oscar Smith High School in Chesapeake, Va., said this morning.

Meanwhile, Dave Rahme is reporting that Raymon will be on the field Monday for the first day of practice as well:

An SU media contact told me earlier this week that Raymon was enrolled at school but that his playing status had yet to be resolved. It is unclear whether that is due to a potential waiver request to forgo the mandatory one-year probation that accompanies a transfer or another issue is involved.

Obviously Doug Marrone hasn't commented on either because he's Doug Marrone and you know by now that he's not going to.

As for the status of Markus Pierce-Brewster, Ben Barrett and Zian Jones, we'll just have to wait and see. But...so far, so good.