Share All sharing options for: Syracuse vs. Northwestern: #BeatNU Tutorial

You may remember these things from Hoya Suxa. They're back, here, for the 2012 football season. We're providing an image -- for your Facebook and Twitter profile pictures -- so that you can participate, however you choose, in our Friday spirit/hate rallies on the Internet during the season. Still don't understand what's going on? Leave a comment and somebody will probably help you out. 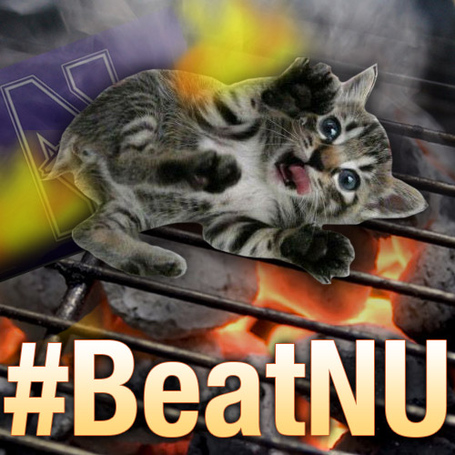 "But Mom, I don't want to!" the boy cried to his exasperated mother. "He's going to get hurt! Plus, my friends really don't like him. He's not like us, he's not as old as a lot of us, and he can barely play. All the other kids are going to hate me if you make me bring him along!"

"You'll take him along and like it, young man. Otherwise, I'm not going to let you play at all," the boy's mother said through gritted teeth. "Your brother needs his exercise. Plus, it's good for him to be around other boys, otherwise he'd just sit in his room all day reading books by himself until his eyes crossed. I'm sure all the other kids will love him."

"Shut it, young man. He's plenty B1G to play with you boys."