When the announcement was made on Friday morning that FanFest was being moved into the Dome, parents all over Syracuse cried, "What? Wait! You can't have FanFest without bouncy houses." In fact, one or two brain cells of mine even considered not going. At Fanfest 2011, we didn't even make it onto the bleachers set up by the practice field, as Little Oranges cannot be dragged out of a jumper in order to watch a football practice.

However, considering that 3-year-old Reese has been asking when we'll go to the Dome again, and thanking my lucky stars that we had NOT mentioned bouncy houses to the Little Oranges in advance, we happily ventured out on a sunny Syracuse afternoon (I'm serious...it cleared up around 1:00) to attend the 2012 Orange FanFest.

Our adventure began with parking, as the Dome west lots seem to have taken quite a beating this summer, as in, they barely exist anymore. After parking in the one that is left, we hiked the girls up the hill, took a break to watch the construction crew, and then headed to Gate B. (See, no rain.) 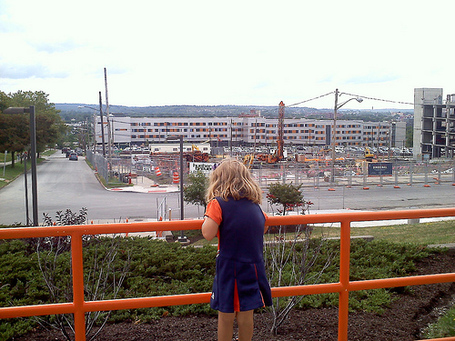 The practice had already started when we arrived, but we spent a little time in the concourse doing the non-bouncy activities. We met the women's soccer team, chatted with Mike Borkowski about the upcoming Otto's ABC book, caught a glimpse of Otto (he didn't stay long) and got some free goodies from Tops. Then, with a bag full of stuff, we went to find a seat and watch practice.

Being that it's still summer, I was a bit out of shape when it came to packing for this adventure. Without my usual bag of tricks, I let the Little Oranges gorge themselves on their bags of kettle corn chip things we'd just received while I surveyed the Dome. The new video boards and ribbon boards weren't on, and being that I lack that macho gadget gene, I will let others comment on whether they'll live up to the hype.

The team spent a couple hours drills, and Paul's general assessment is that the offense looks better than the defense. Reese did make some truly important observations, though. She saw some upside-down orange trash cans and asked what they are for. When we encouraged her to take her best guess, she decided they may be for drumming, or maybe the players would climb on them. I don't think the drill lived up to her expectations. 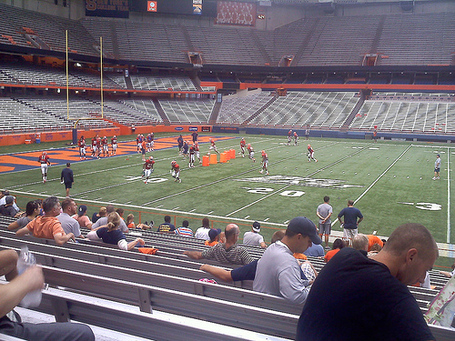 Reese also commented that the football players are good at lining up and waiting their turn. I'm sure Coach Marrone is going to continue to work on that at Fort Drum this week.

Soon, the first round of snacking ended and the Little Oranges needed another trip to the concourse to burn some energy. It was then that we discovered that FanFest need not worry about bouncy houses in the future. The Dome is already fully equipped for all of your jumping needs.

On our way back from, oh, about 20 minutes in the bathroom, I stopped by the concession stand because it looked like they had free bottles of water. When I asked if that was the case, the friendly SU representative told me that not only was the water free, but they had free ice cream. Wait, let me say that with a little more feeling. FREE ICE CREAM. Not just any ice cream, mind you, but chipwiches! I think this was just about as exciting as my Charley Loeb moment from last spring. And now I wouldn't have to cook dinner, because the Little Oranges had been fed chips and ice cream at the Dome. Ah, Orange Parenting. 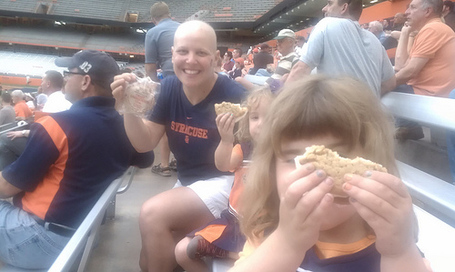 After a short scrimmage at the end of practice, we lined up to take the field ourselves. Most of the fans waited at tables for player autographs, but since we've been there, done that, and have many crushed and crinkled autograph posters at home, we went for the big money: the Marrone. It took some Orange Parenting strategy for this one. Since the line was going to be a long one, Paul went to wait, and I ushered the kids to the orange S for some running. It's not a bouncy house, but it helped burn off the sugar high. 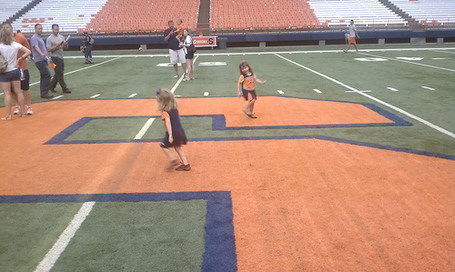 In fact, I think I was pretty successful. But I do have a Mom question: I'm sure the players are sweating and spitting on the turf. Do they ever clean it? Or were my kids laying in years' worth of football player yuck? 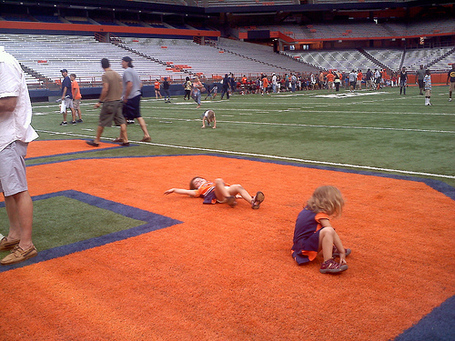 Finally, I noticed that Paul had made it to second in line. I rounded up the Little Oranges and on the way over, we practiced our, "Hi Coach!" and "Thank you, Coach!" routine. Then, for the second time in their short lives, my girls had their picture taken with Doug Marrone. (Why is it that the important photos, like this and the chipwich one, always come out blurry, while Reese at the construction site is crystal clear?) 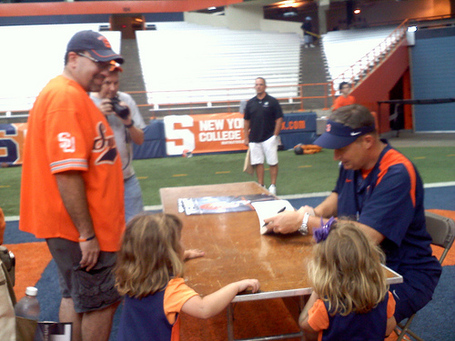 This photo is dedicated to Sean, because the book Coach Marrone is signing is How to Grow an Orange. Coach remembers meeting Sean, and mysteriously knows that he lives in Seattle. Maybe it's because he reads this blog. If so, Coach, you owe us some bouncy house time.