Doug Marrone Never Fumbles & Other Interesting Notes From bE Magazine

Share All sharing options for: Doug Marrone Never Fumbles & Other Interesting Notes From bE Magazine

The Summer 2012 issue of be Extraordinary (bE) Magazine, the official magazine of Syracuse Athletics, is available online and I suggest you give it a perusal. There's lot of good articles, including a cover story about National Champion Jarrett Eaton. But here's the stuff that caught my eye and seemed most important to share: 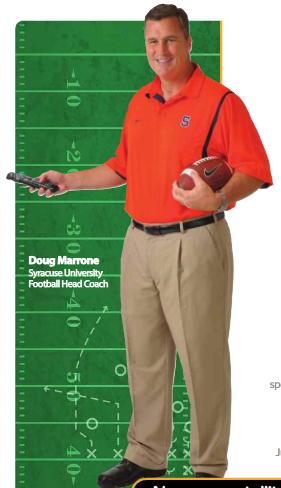 I know that looks like a staged shot of Syracuse head coach Doug Marrone holding a remote in one hand and a football in the other but it's actually a candid shot of Marrone in his home, where he is holding the remote and a football at all times. He has instructed the members of his family to attempt to make him fumble and if he ever does, they can go to Disneyland.

The Marrone children have never been to Disneyland.

This is new Syracuse linebackers coach Steve Morrison. He doesn't seem like the kind of guy who likes to sit around listening to slam dancing music. And yet...

What's On Your iPod?

I have everything from Celtic music to heavy metal, slam dancing type of stuff. I like it all, but pretty much rock and roll.

And just in case you weren't sure that Morrison was a linebacker...