The Mookie Jones Situation has been one of the more curious ones in recent memory for Syracuse Orange basketball fans.

A fan favorite back-up, Jones abruptly left the team back in January for reasons unknown. He told fans on Facebook that he left for "family" but also noted that he would "be back next year." We celebrated his entire catalog while looking back on the Mookpocalypse left in his wake. All the while Mookie continued to tell fans that he would return for the 2012-2013 season. Jim Boeheim and SU stayed mum on the issue (or were never asked).

Over the weekend, we found this commercial for a local barbershop featuring Mookie. Despite the fact that he doesn't say a word and isn't named, his implied promotion of the shop would be considered a violation of NCAA bylaws if Jones were an active student-athlete, even if he wasn't paid. Just by making that commercial, he probably made himself ineligible to ever play college ball again, if he had any intention.

Today, Mookie took to Facebook to basically announce he's done at Syracuse and he's moving on. 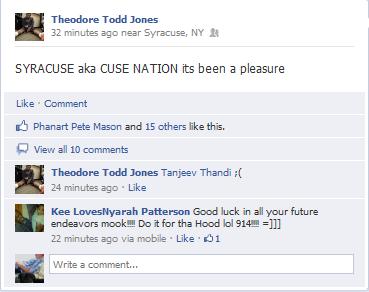 When asked where we was going, Mookie replied "to the money."

No word on whether or not that commercial is the reason or if Mookie's chances of coming back to the program were ever really legitimate. The Orange would probably like to just use that scholarship on an up and coming talent or transfer at this point, despite the fact that Mookie is a good guy and great teammate.

The real question at this point is whether or not Mookie left due to academic reasons and if so, what affect that has on Syracuse's APR score. Hopefully not, or at least hopefully he took care of whatever issue stood in the way of his playing for SU.

We wish Mookie well in his journey to "the money" and hope that one day he can unblock me on Twitter so we can be pals.