Syracuse Orange football and lacrosse legend Jim Brown is on campus today, meeting with the current team and filming some kind of promo for the school: 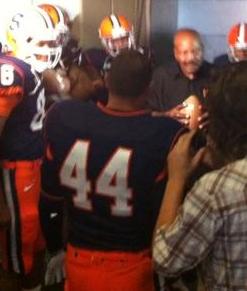 So that only leaves one explanation...

Syracuse has cloned Jim Brown, Ernie Davis and Floyd Little and combined their DNA to form one SUPER-44.

No word on whether or not Floyderniejim Browndavislittle is eligible this season or if he has to sit out a year due to some kind of prescient NCAA clone bylaw. We'll keep you posted.

In the meantime, the current Syracuse players were very excited for the chance to meet the original Jim Brown.

Met Jim brown smh the legend himself.. I need to be successful in this sport I put in too much not to

The legendary Jim brown and I. It's a honor to be in his presence #44 twitter.com/rsloan62/statu…