We made it all the way into the 30's of the Syracuse Orange football roster for the Get To Know An Orange Man series before they went and added all the newbies in. So, we'll keep going as-is but we'll double-back once we're finished and grab all the freshman and walk-on profiles we missed along the way.

In the meantime, however, let's check what these newbies have to say for themselves and more importantly, how good their initial profile picture looks before Doug Marrone slaps a suit on them. First impressions and whatnot.

#95 Josh Manley (DE) - Giving us the kind of unkind expression we expect from our DEs.

#90 James Washington (LB) - Standing in front of a brick wall seems like a metaphor.

#84 Ben Lewis (WR) - Kinda amazing symmetry from the bottom of his neck to the top of his head. 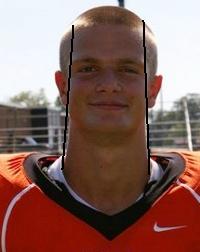 #82 Alvin Cornelius (WR) - Not pleased with the photo op.

#80 Ron Thompson (TE) - Like a much angrier, much meaner Michael Irvin. Perfect.

#76 Kyle Knapp (OL) - Did you just insult Kyle? Cause he seems confused by your assessment and intent on voicing his displeasure with you.

#70 Marcus Coleman (DL) - Flashing that same smile he'll use every time someone asks he's related to Derrick or DaJuan over the next four years.

#57 Omari Palmer (OL) - Omari has more facial hair in that photo than I've had in my entire life combined.

#29 Devante McFarlane (WR) - Devante had heard that joke before. A lot of times.

#27 George Morris (RB) - That feeling in the back of your skull is George's eyes boring into it.

#12 Dontez Ford (DB) - Yeah, Dontez realizes his middle name is Da’Vaughn. You got a problem with that?