Going to the Final Four isn't exactly a given for Syracuse Orange basketball. We've only done it four times and haven't done it in a decade. This past season was a great reminder of just how difficult it is to actually get there.

So when we do get there, it matters. And back in 1987, it probably mattered more than any other time in school history. The 1975 Final Four run was a little bit of a fluke. As Jim Boeheim points out when you ask, we weren't supposed to be there and we were dispatched by Kentucky as such.

By the time we got to 1987, I have to imagine being a Syracuse basketball fan was something of a frustrating delight. We were so good for so long and yet we couldn't get over that hump. Every time we got close, something got in our way and we remained on the outside looking in while Georgetown and even Villanova tasted Final Four glory.

And then in 1987, it all came together. The team topped North Carolina in the regional and advanced to their second Final Four, first under James Arthur. It must have been such a euphoric release as a fanbase. We made it. We belong.

And the celebration that ensued at Hancock Airport was the most 80's Syracuse basketball celebration I've ever seen.

Right from the get-go, anchor Bill Carey declares himself to be Syracuse's answer to Ron Burgandy. Look at that mustache! It's going to crawl off his face any second...

Then there's the hats the players are wearing. Unironic mesh backing! And their jackets...those 80's starters with the matching ringed sleeves and collars. They look so uncomfortable! So 80's!

That orange sweater with the giant orange embroidered on it? Good lord...

Jim Boeheim, at the height of his "James Boeheim, Esq., Attorney At Law" phase. 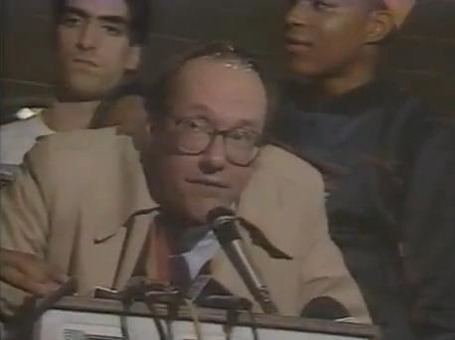 Acclaimed D.J. Rony Seikaly before he knew where Ibiza was.

And then there's this sign that Derrick Coleman (I think) holds up towards the end of the video. It's not entirely 80's but it's the perfect indication of how much the world has changed and not changed since 1987. He's holding up that sign at a public event in front of a massive crowd of people that includes children and it's not only being filmed by a TV crew but that TV station then saw it and still decided to air it. So many of those things just wouldn't happen today.

The only part of this that stands the test of time is Dick Vitale can eat...well...himself. 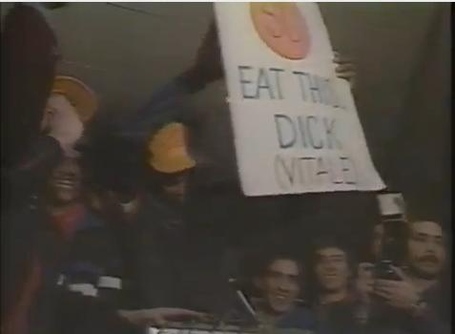 By the way, as an aside...why do I get the feeling we would never do something like that today? Look at that place, it is ABSOLUTELY PACKED with happy, smiling, excited, screaming Syracuse fans. And everyone is going nuts, hooting and hollaring. Chanting for the players. Patting them on the heads as they walk past. Cheering for Boeheim.

We would never do that today. If Syracuse beat Ohio State a couple months ago, 40 people would have showed up at Hancock and that's about it.

And I'm not trying to knock us as a fanbase, I think in most cases that's what would happen regardless of school or team or fans. What happened? Why as sports fans don't we do stuff like this anymore? What changed? It's weird. That looked like a lot of fun.