Are You Ready for More Platinum?

Share All sharing options for: Are You Ready for More Platinum?

Sean and I were screwing around on Twitter on Monday ahead of the men's lacrosse national title game, kicking around potential names for a Loyola Greyhounds blog if SB Nation were ever in the market for such a thing:

As it turns out, we should have been doing it for this here luxury Internet destination.

Everyone that hasn't taken a lead pipe to the bean atop their neck in the last six months or so remembers Nike's dazzling "Platinum" hoops uniforms. Whether you liked them or not likely turns on whether you were neglected eyesight with the ability to distinguish colors at an early age. Everyone kind of assumed that we'd never have to see such an abomination again after the Orange finished their contractual obligation to look like spacemen from a B movie that involved scantily-clad women on the moon.

Well, no such luck, pals and gal pals. It appears as if Nike has set its sights on John Desko's brain smashers and may be outfitting them from the future next season: 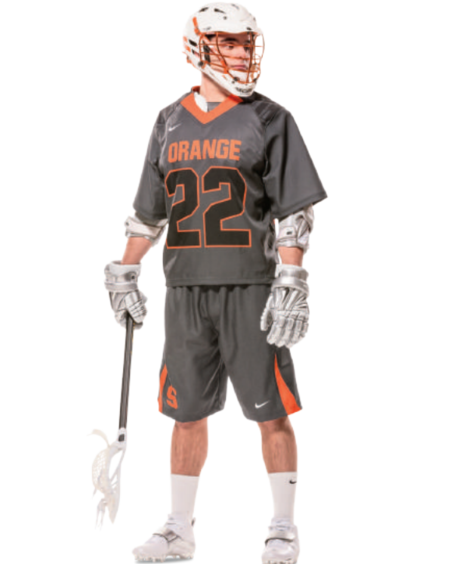 This isn't official or anything yet, but it was prominently placed in Nike's spring men's lacrosse catalogue. There are apparently all kinds of fancy features with the kit, but none of them seem suited to actually winning face-offs and making goal scoring not impossible.

If you need me, I'll be getting my rioting torch and heading out to Oregon for some "negotiations."