Share All sharing options for: Top Of The Dome, Ma...

A few weeks ago, Marc Lomasky and friends made a donation to the Syracuse Class of 2012, of which they are a part. As part of the donation, they were promised in return to a tour of the Carrier Dome locker room.

Unfortunately for them, Doug Marrone and the Syracuse Orange football team were in the midst of spring practice that day (how were they to know? It was closed!) so they were unable to take the tour, missing out on what could have probably been the greatest Charley Loeb run-in story of all time.

The good news...they got a tour of the Carrier Dome roof instead. 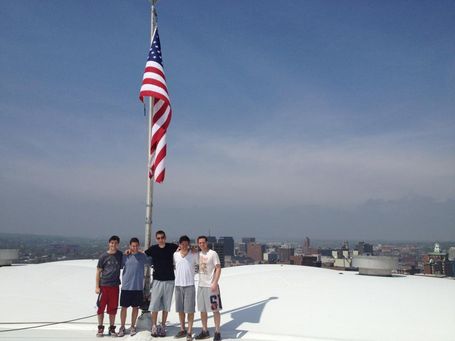 If Michael Bay made a college movie in Syracuse, this would be the poster.

Fair trade, I say. Here's a panoramic view from the top of the Dome.

Has anyone else had a chance to walk around up there? Isn't it being held up by air conditioners or something?