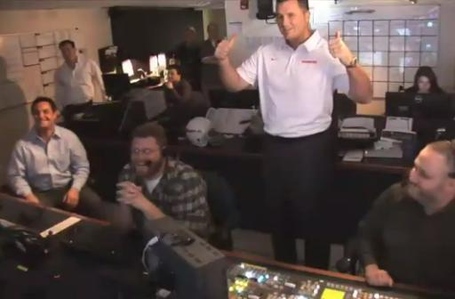 2. Doug Marrone was the prototype for Finn in GLEE, basically.

"My senior year, I played the leading role in Damn Yankees. I played Stephen Douglass' role, Joe Hardy, which was awesome. I loved it. [I had to] sing, dance, take lessons, all of it at a young age."

3. He pronounces Onondaga as "Onondawger."

From the standpoint of speeding, you were doing a tremendous 85 in a 65.

"From the outside looking at the program, it wasn't doing as well as we all aspired it to do."

"I look at my job this way. I know that people are gonna judge me by wins and losses. For me, I judge myself on what type of person am I graduating out of our program. And that's very, very important to me."

"I watched him early on and, you know, I guess when you use the term 'road grader' and you watch other teams that were defending him...and they were saying 'on defense, we were just trying to cut him coming out.' He has a background in wrestling, something that I always look forward to, or look into whenever we're recruiting an offensive lineman.

We've been lucky. I've been fortunate. We've got a lot of good, young offensive lineman. We picked Omari to come in and he has the ability to help us...quickly, because of his type of style of play."

"That's the one mistake we've made in our profession. We put these measurables on kids and I always say this: the hardest measurable to find out is the one that's right here (points at heart). How bad do they want to be a great player? How competitive are they, not just on the field but off the field?

"Well I think you guys are smart enough...you can look at some teams and see where people are, for lack of a better term, buying wins. And conferences do that.

You know, when I was [a player], we played Nebraska. We played Florida. We played Illinois. We played all those teams and, I like it because we're gonna be up for this challenge and be competitive as all get-out. We have to be ready every week. You can't have a letdown. So, it puts us on a high alert but also it shows what we are. I'd rather know right now, rather than try to work the schedule, build some teams in, up and down...strategic planning. Hey, let's go play football, let's see how good we are, let's get after some people's butts and let's go."

10. The way Doug Marrone makes it clear that DOC Gross has been beating terms such as "MetLife Stadium" and "New York College Classic" into his brain all off-season. BRANDING!!!