Former Syracuse Orange guard Dion Waiters continues to prepare for the 2012 NBA Draft and keep a running diary on Dime Magazine's website while doing it.

What is Dion up to these days as he preps for the next chapter of his life? I'll let his Syracuse University-honed prose speak for itself...

...coming back to continue working out in Vegas, I’m being reminded it’s way too hot out here.

Syracuse could get warm but it never got like this. Sometimes it was a nice day… sometimes even a perfect day there.

When we go out, we just walk around, take pictures at the buildings...People will be in costumes.

They are going to have our own signature moves in the game. If they get one part of my game right, hopefully it’s the spin move. Either that, or my dunk and then the celebration after that. (Ed. Note - very humble).

[Austin Rivers and I] actually played one-on-one for real. 2K had us play a game for real against each other. We went to five. I won 5-3. (Ed. Note - again, very humble).

I don’t know if I’d change anything about Madden. I like it all honestly. I think they changed or go rid of a lot of the glitch plays in the game and made it realer.

As mentioned, Dion took part in a motion-capture shoot for 2K Sports' NBA 2K13. While there, he took The Photo That Launched A Thousand Retweets. 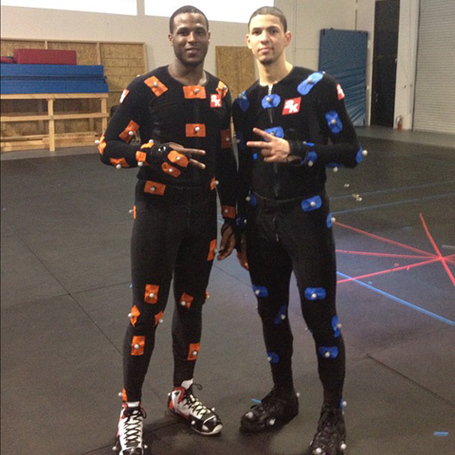 That sound you heard was 15-year-old girls everywhere sighing as they tweeted Dion something sexually-suggestive. And Dion retweeting it...