The NBA draft is a week away and the Syracuse Orange have four players up for selection. Some have left early and others are only going because the NCAA says they're not allowed to play anymore. Drafting the Orange will follow Scoop, KJ, Fab and Dion as they prepare for the draft and the next phase of their basketball careers.

With a little over a month left until the 2012 NBA draft, teams are getting a clearer picture of what their needs are and which rookies to-be are likely to be available when the clock starts. That means it must be time for a mock draft.

For those of you expecting my usual in-depth analysis, you're out of luck on this one. I have neither the time nor inclination to go through all the draft scenarios for even the first round, much less both. Instead, I'll be looking at where the outgoing Orange players show up on the mock draft over at NBADraft.net and dropping some knowledge based on the projections there.

Selection: Round 1, Pick 20 by the Denver Nuggets

Knowledge: As potential NBA destinations go, Dion could do worse than Denver. The Nuggets are coming off a solid campaign that ended with a Game 7 playoff loss to the Lakers. George Karl is one of the better coaches in the NBA and the ownership there at least appears to be genuinely comitted to winning. Denver has two of the league's better young guards in Arron Afflalo and Ty Lawson, plus a battle tested veteran in Andre Miller. On paper, it looks like it could be a good fit for Dion. It's a team that's young enough to want to play a running game, which suits Dion's strengths, but has veterans like Miller who can help the rook hone his craft. With Afflalo, Lawson and Miller already entrenched there, it's unlikely Dion would be able to secure a starting job immediately, but he's already proven he has what it takes to be a factor off the bench. If he can bring the same caliber of bench play to Denver that he provided at Syracuse, he could be a valuable member of the rotation of a solid playoff team. 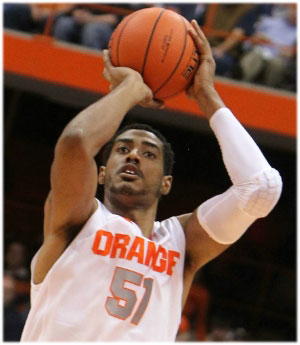 Selection: Round 1, pick 24 by the Cleveland Cavaliers.

Knowledge: This pick has me sort of scratching my head, since this mockup has Cleveland taking Andre Drummond third overall. Sure, Dummond could possibly play power forward, so drafting both him and Fab has potential to give the Cavs a twin towers lineup reminiscent of Robinson/Duncan or Gasol/Bynum. But both are considered projects, so such a scenario would take years to come to fruition in the unlikely event that it ever develops at all. For a guy who swore to his fans that his Cavs would win a title before Benedict Arnold LeBron James, Dan Gilbert is certainly taking the long route to respectibility. Plus, when your best player is a guard who likes to operate in the paint, the last thing you need is two rookie bigs clogging the lane. Of course, the Cavs only have two guys listed at over 6'9" on their current roster, so getting bigger is likely a priority. Also, picking this late in the first round (on a bonus pick acquired from the Lakers in the Ramon Sessions trade) it's likely to simply be a case of taking the best/biggest player available at that point. I don't particularly like the pick, for the Cavs or for Fab, but I wouldn't be totally shocked if it happened. I think I'd prefer him to go two spots lower to the Heat, as an upgrade to the undersized and largely ineffective Joel Anthony.

Knowledge: Much like Cleveland picking Fab, KJ going to Denver appears to be a case of simply taking the best available player. Glancing down the list of players projected to be taken after Joseph, it's hard to find a SG/SF that's head and shoulders better than Montreal's Finest. So, really any team that's in the market for a wing is a possibility. Denver isn't a great fit in that they already have Danilo Gallinari, Corey Brewer and Wilson Chandler on the squad, all of whom are better than KJ. Assuming this is the pick and all those guys stay, it's hard to see KJ making the team. The Nuggets have a glut of talented wings already, plus the projected addition of Waiters in the first round. Unless Joseph is absolutely outstanding during the summer league, there's no reason for Denver to try to move any of those guys to make room for him. 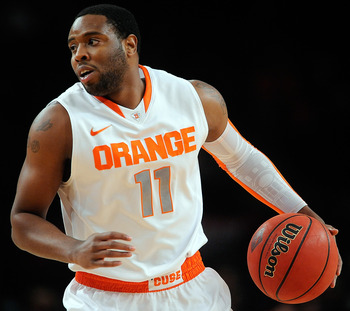 Knowledge: No surprise here that Scoop isn't listed among the potential draftees. This is what's expected by everyone except the man himself. But I will take the liberty of inserting him at pick 54, going to the Philadelphia 76ers in place of Scott Machado. Sure, it smacks of a feel-good puff piece, having Scoop defy the odds and catch on with his hometown team. But, really, what's the difference between Jardine and Machado? At the risk of sounding like a homer, every statistical edge Machado has can be chalked up to playing a bigger role on an inferior team in an inferior conference. Anyone who thinks Scoop couldn't average 13PPG/10 APG playing for Iona is kidding themselves. And Philly is a great fit for Scoop (albiet for Machado too). The Sixers have a phenomenal array of slashing wings, but not a point guard among them. Andre Iguodala is the best PG option they have. Scoop running screen/roll with Elton Brand, and dishing to Iguodala and Jrue Holiday on the break could be superb. Honestly, I don't expect Scoop to be drafted. What he brings to the table doesn't translate well to individual workouts against cones and folding chairs. But I do think that if he can shoot well in the summer league and prove he's not a total liability on defense, he'll make an NBA squad. There's always a place for instinctual playmakers like Scoop and he has value as a backup guard who can both effectively orchestrate a second unit and also hold his own for limited stretches while running with the big dogs.