Big East Lacrosse Tournament: A Non-Tradition Unlike Any Other

Share All sharing options for: Big East Lacrosse Tournament: A Non-Tradition Unlike Any Other

The oldest lacrosse tournament in the world, the Big East Lacrosse Tournament, kicks off its 2012 edition on Thursday. This year's BET promises to be the most memorable one since...the other one. 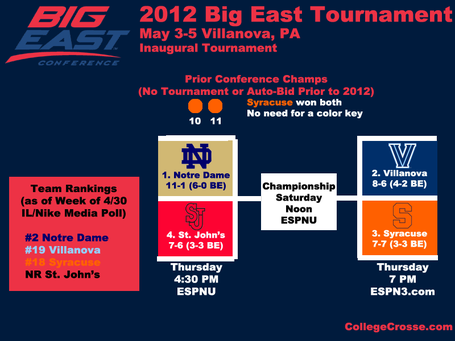 They even did an infographic for the Syracuse - Villanova game and infographics for each team profile, because that's how all the cool kids communicate these days.

And they even preview the whole god damn thing to boot...

Notre Dame is likely a strong favorite in this thing -- I mean, there's a reason that defensive sieges strangle the life out of the attritioned -- but with two teams fighting for their NCAA Tournament lives (Villanova and Syracuse), frantic, motivated play from either team could unseat the Irish from the top of the mountain. The Wildcats and Orange both need wins like Mr. Body needs your lungs, and their clash on Thursday evening should be as hectic as a convict heading for the fence and smelling freedom.

The Orange are indeed playing for their postseason lives on Thursday. Lose and the chance that DOC Gross will pose in front of the team for a photo op at some point in the next month is over. Lose and Syracuse will miss the NCAA Tournament for only the second time since 1982 (the miserable 2007 season). Lose and it also means no more Double Desko Time.

"It hasn’t even crossed my mind," John Desko said. "I’m focused on the team. I’m sure when it’s all said and done I’ll have a better appreciation for it."

The Orange will welcome back faceoff specialist Chris Daddio, who was suspended for the Orange’s regular-season finale at Notre Dame for a violation of team policy. Given the state of Syracuse's faceoffs this season, I don't know whether or not that does anything for us.

The good news for Syracuse is that this Villanova team is one on the decline. After a 3-0 start, the Wildcats have gone 5-6, bottoming out with a 15-11 loss to Providence last week, the Friars' first win in Big East history. Both the Orange and Cats have had their struggles and the game between them this season was a one-point affair, so don't count SU out by a longshot.

Thursday's game will air live on ESPN3.com and air on ESPNU Thursday night at 11 p.m. You can also listen to the game live on 99.5 FM or on Orange All-Access.

Go listen to John Desko talk about the Big East Tournament and get ready to watch Tim Desko do something crazy, hopefully not for the last time.