The sixth annual ‘Cuse Awards went down last night in Goldstein Auditorium as student-athletes from all Syracuse Orange men's and women's teams were honored for their hard work this past year.

Along with that fancy video that gave us the greatest thing we've ever seen, Floyd Little dancing on a table, they also handed out a whole bunch of awards to student-athletes and others involved with SU Athletics.

Full results and info here but the breakdown is below...

Male Athletes of the Year: Jarrett Eaton, Track & Field (who was stylin') 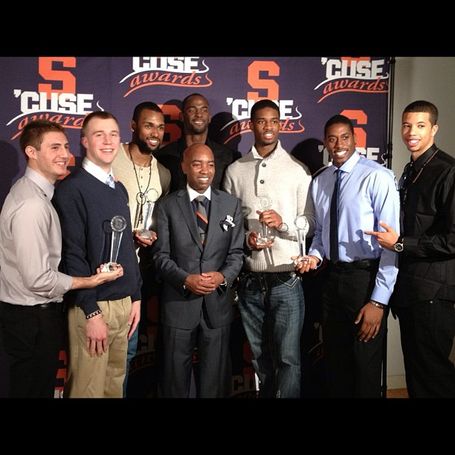 Most Improved Team of the Year: Women's Lacrosse Team

Game of the Year: Syracuse's 64-63 win over the Wisconsin Badgers in the Sweet 16.

Play of the Year: Kris Joseph's decisive three-pointer to give Syracuse the win over the Georgetown Hoyas.

NACDA Award: Men's Basketball, who earned 73 points for the university.

Congrats to all the winners and to all the student-athletes who make Syracuse Athletics one of the best athletics programs in the nation.