Orange Parenting: Perception of the Players

Share All sharing options for: Orange Parenting: Perception of the Players

Wow. That title sounds deep and serious. Really, this is just your normal "Orange Parenting" column with a deceptive title. As I've done before, I'll start with a story from my Orange Childhood.

As you know, I attended lacrosse games with my Orange Dad. I remember sitting in the stands midway up on the first level and seeing the players as big, muscular, and intimidating. That was the case for both the Orangemen and for their opponents from Johns Hopkins, Maryland, or Princeton. It made me think that in order to play college lacrosse, one had to have a certain genetic disposition for size, strength, and general athleticism.

When I arrived in my freshman dorm at Johns Hopkins, there were two boys across the hallway who were on the lacrosse team. Yes, Doug and Todd walked around with a swagger and worked out a lot, but by the end of orientation, it was clear that they were just as awkward, silly, and normal as every other teenager entering college. After months of seeing them slurring at 2am on Friday and then stumbling to practice at 9am on Saturday, not to mention typing papers for them moments before they were due and giggling together during episodes of Seinfeld, my perception of the college athlete had completely changed.

Then lacrosse season rolled around. Each Saturday, I saw Doug and Todd and the rest of the normal guys I'd met go face-to-face with the huge, intimidating warriors from universities like Virgina, Duke, and Syracuse. Man, they grew 'em big in Syracuse. But Hopkins lacrosse players were normal-sized.

It's all perception, really.

This past Saturday at the Syracuse Spring Football Game, my family sat with a group of NunesMagicians in the first two rows at the Dome. It was the closest I'd ever been to the Syracuse football players during a game, and I totally experienced that changed perception again. By nature, I assumed a football player, especially from my Orange team, would be big and scary. But I found out that when I could see their faces under their helmets, they're just like you and me. I heard their voices talking, and it wasn't in guttural grunts even though they were in the midst of a game. (Okay, you got me. Not really a game, but something resembling one.) I think I even saw one player stick his tongue out at another. (Or maybe I've just been around preschoolers too much.)

It's was good to know there are normal people on our team. But I know that Maggie didn't share my perception.

Around the Dome on Saturday, there were piles of Syracuse Football posters drawn by Mike Borkowski. Maggie stared intently at hers for quite a while. Then she began to analyze how scary the poster is because the player has red eyes. She went into a 4-year-old line of questioning: Why does he have red eyes? Why is it scary? Are the players' eyes really red? Will my eyes turn red? Based on the answers she received to those questions (I don't actually know how Paul was responding to her), Maggie came to the conclusion, "When I grow up, I'm going to be a football player and my eyes will turn red." So there you go. Scariness of college athletes has now been explained: It's all in the eye color.

After the game, we took advantage of the opportunity to get an up-close look at the players and their eye colors. The autograph session on the concourse gave my Little Oranges the opportunity to go down a table of football players and see that they're real people. I've trained the girls to say, "Good game!" as they ask for autographs, and across the board, the players were gracious and friendly to the girls. Not a red eye in the bunch.

Although we were lined up early and got quite a few autographs, after about five minutes, the orderly line devolved into a bit of chaos. Fearing for the girls' lives due to some red eyed autograph seekers, Paul and I escorted the girls away from the table and to the outer wall on the concourse of the Dome. We took a deep breath and were about to walk back to our seats for the lacrosse game when the Red Sea parted. I'm not exaggerating here when I say that the crowd of fans five deep in front of every player just stepped aside and gave me a direct path toward Charley Loeb and his magical silver Sharpie. Every 40-year-old woman's dream! Especially when she can say that she's just approaching in order to get her kids an autograph. 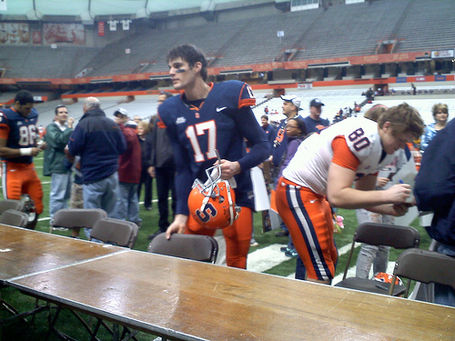 (This is actually a photo I took last year, but my perception of Charley Loeb remains the same.)