Share All sharing options for: #140Cuse Wrap-Up: We Came, We "Ummm'd," We Made New Best Friends (Maybe)

Right off the top: I want to thank Dean Liddy, Anthony Rotolo, David Rosen, Kelly Lux, Alyssa Henry, and the entirety of Syracuse's iSchool -- I'd name you all, but then my fingers would bleed and that makes for bad blogging technique -- for allowing us to participate in the 140 conference up at the university. I've done a lot of conferences in my day -- on boring things, mostly, like lecturing rich corporations on how to continue to stay rich corporations -- and the entirety of the #140Cuse conference (from the receptions to the actual events) was all first-rate. Excellent job all around.

Which reminds me: We hope that we didn't ruin things too much.

If you went to the conference then you already know: The event was a blast. Even though we knew we were essentially the Toy Department, it was still a load of fun. Following the co-founder of Reddit and a very nice lady that handles social media for a little outfit called "NASA" was a little awkward -- Here's the guy that helped change how Internet computing machine users get information! Here's a lady that helps people connect people with the great unknown! Now, here are three guys that send dozens of tweets about Fab Melo's choice in hair shaving accessories (a weed whacker, apparently)! -- but, yet, we managed not to totally embarrass ourselves and, we hope, enlightened you guys as to what's going through our heads when we put stuff into your melons. (The answer: very little.)

And Brent made the fancy digital transcription machine type out supercalifragilisticexpialidocious at the end. So, yeah, the wisecracking didn't take a day off just because we were on a dais and, apparently, "experts."

Here's the debrief video that we shot after our 15 minutes of sitting on a couch and, from what I'm told, making at least one audience member hate my guts:

Did you catch that at the beginning? (No, not the fact that I'm chewing gum like a ruffian.) Well: 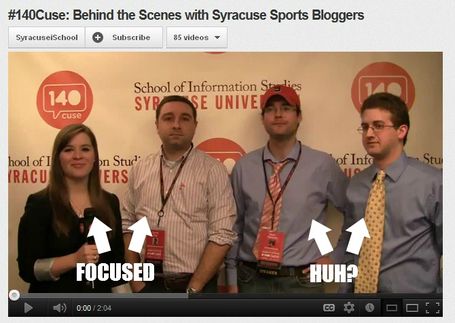 A few more items after the jump.