Doug Marrone has closed Syracuse Orange football spring practice to the media and fans indefinitely. And so while we can't know for sure what's happening on the gridiron, we can certainly make it up.

Below is a fake account of what's going on at spring practice. Of course, there's a chance all of this is true, so you might as well presuppose it.

Practice actually did not take place on Sunday due to unforeseen circumstances.

Everyone was dressed and ready to go when the Syracuse linebacker unit, consisting of Lewellyn Coker, Dyshawn Davis, Cameron Lynch, Dom Anene and Femi Aliyu, gathered in front of the exit and instructed every other member of the team that in order to take the field, they'd have to go through them first. 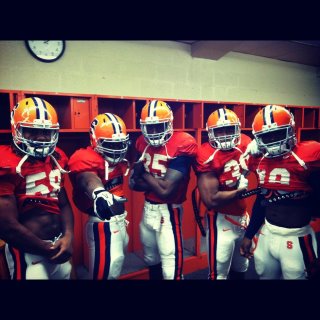 Practice was cancelled 45 minutes later and kicker Riley Dixon was taken to see the SU psychologist to "talk out the horrors he had witnessed."

Coaches are working with the linebackers to ensure that this doesn't happen in the future.

In the real world, your first chance to actually see the Syracuse football team practice in person is coming up. Thi Saturday, the team will be holding an open practice in Rochester as a way to expand the reach and interest of the program through the state.

The practice at Sahlen’s Stadium, the home field for Rochester’s professional soccer teams, begins at 11:45 a.m. and will feature an intrasquad scrimmage, contests and prizes, season ticket information, Syracuse gear and food and drink concessions. The team will host an autograph session following the practice. Admission and parking are free.

Since no one is going to stop asking him about closed practice, Marrone reiterated his stance on closed practices, which will continue through the entire spring, save for the Rochester one and the spring game.

"For us, it’s really no distractions. Our noses are (to) the grindstone and going 100 mph – because you don’t have a lot of time, you really don’t," Marrone said Monday on a video posted on the SU athletics website.

Marrone reiterated remarks he made last week in a Post-Standard story that he doesn’t want media and fans seeing things the team is working on that may not become part of the offense, defense or special teams.

Marrone added that he's very pleased with what he's seen so far:

"We are trying to get this team ready," Marrone said. "This has been the best spring that we have had. I feel comfortable with the direction we are going. They players and coaches have been outstanding. We are getting better right now. That is all you can ask for as a coach."

A closed spring practice is a small price to pay for fans if they get the wins to show for it come September.