In Case You Were Under a Rock:

I just want to thank everybody who supported me my two years at Syracuse I appreciate the love y'all showed towards me I will miss y'all.

I will miss putting on a Syracuse jersey and running through the tunnel to 30,000 #cusenation fans I will always bleed orange...

This move honestly makes sense for Waiters in my opinion. Yes it sucks for us fans ... we all wanted to see him give us another run at 'Cuse but let me see you give up guaranteed millions of dollars. That's right, you wouldn't either. Good thing he toyed with our emotions and tried to fake us all out the night before he officially declared.

If you haven't heard something come out of my mouth it's simply a rumor...

Call Out of the Week:

Sullinger nickname should be PoohBear

I find this very funny and can't help but thinking of Pooh Bear now every time I see Jared Sullinger. Bad news for Brandon Triche though ... Pooh Bear just knocked us out of the tourney.

On a side note. Has anyone else noticed how femminine the sweater that Triche is wearing in his twitter photo is? This is a real conversation I had with my girlfriend this week.

Her - "I want to tweet at Brandon Triche and find out where he got that sweater that he's wearing in his twitter picture."

Her - "Because its cute and want to wear it, I think it's a girls sweater." 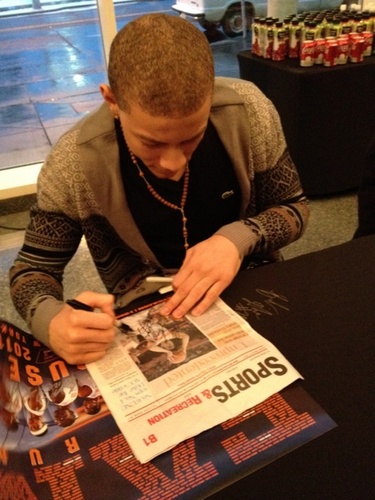 April Fools Prank of the Week:

Just want to thank #cusenation for all the support and I'm goin to miss y'all it's been a great experience, but I'm leaving.

Even though this was tweeted on April Fools and everyone should know better, I'm sure James Southerland terrified a large group of 'Cuse fans with this tweet.

Kevin Love will go down as the best white basketball player

Bold prediction Albert Nassar. Kevin Love is fantastic but it might be a bit early to call that one. Are you forgetting about Larry Bird, Rick Barry, Dirk Nowitzki, Bill Walton, Jerry West, John Stockton, "Pistol" Pete Maravich, and Bob Pettit?

Re-tweet of the Week:

"@NotDrewSweeney: @JaySouth43 Can I get a retweet for absolutely no good reason whatsoever?"hell f****n yeah you can!!! Hahaha

Studying is harder then I thought

Another example of reading/doing other thins being hard for a Syracuse athlete.

If you want a laugh, check out Brandon Reese's twitter feed. Notice his background picture is of Jim Boeheim picking his nose. Also if there are any great twitters I should be including in these articles, let me know by leaving their twitter handles in the comments section.