Whenever Doug Marrone Holds A Press Conference In A Produce Section, We Are There

Share All sharing options for: Whenever Doug Marrone Holds A Press Conference In A Produce Section, We Are There

As if the Syracuse Orange football team didn't have enough pressure on themselves to score touchdowns this season, now every time they fail to score, they'll literally be stealing food from children.

As part of the "Juice in the ‘Cuse" charitable campaign, for every touchdown scored at the Carrier Dome by the Syracuse University football team during the regular 2011 football season, Tops donated $100 in Tops Markets gift cards and Nestle USA donated seven cases of Juicy Juice fun size juices to the Ronald McDonald House Charities of Central New York.

Look, PR opportunities are nice but if the organic rhubarbs aren't placed leaf-up, then it's all for naught: 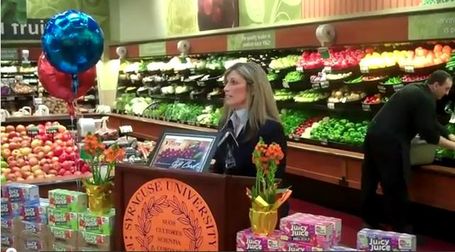 The Starting Five for the Tops Friendly Markets basketball squad. Doug Marrone at the 5, obviously. Lunardi has them as a 7-seed in his way-too-early bracketology. Seems low. 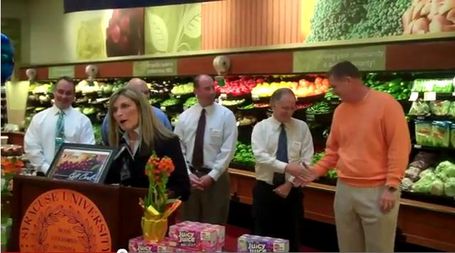 "If I have to do one more of these without getting a new workout facility, I'm gonna juicy-juice Daryl next time I see him." 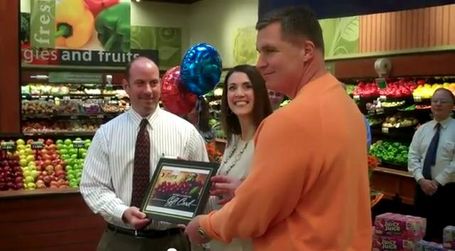 Doug's joke about wearing orange gets a few courtesy laughs but I actually don't get it. Are you telling me that Doug Marrone doesn't wear orange at all times? Most of the time? He feels uncomfortable wearing orange? I feel like I've been living a lie. 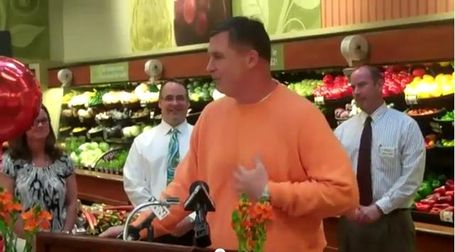 And in case you're wondering, Marrone says the word "community" six times. He is nothing if not a tremendous word over-user from the standpoint of over-usage.

My favorite quote? "That's a lot of Juicy-Juice to help the children throughout the year." I've seen what's in Juicy-Juice. I'm not so sure how much it's HELPING them. But...I see your point.